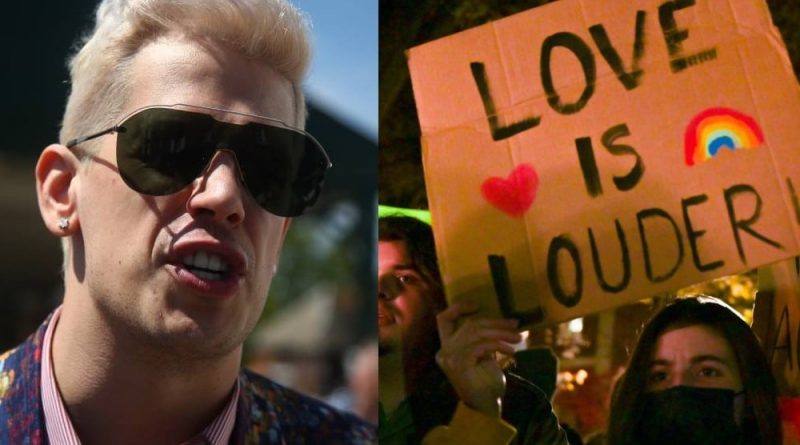 Hundreds of students came out in force to condemn Milo Yiannopoulos at his controversial “Pray the Gay Away” event.

The so-called “ex-gay” alt-right troll gave a speech at the Penn State University on Thursday (4 November), in part to promote his latest grift, a new conversion therapy venture in Florida.

Hosted by the student group Uncensored America, the event was attended by around 250 people with tickets ranging from free to $55 for a special meet and greet.

News that Yiannopoulos was visiting campus was met with fierce criticism from the student body, who petitioned the university to cancel, garnering more than 13,000 signatures. But university officials said they were legally powerless to stop it.

“As a public university, we are fundamentally and unalterably obligated under the US Constitution’s First Amendment to protect various expressive rights, even for those whose viewpoints offend our basic institutional values,” administrators said, as reported by Metro Weekly.

By the time Thursday rolled round tensions were running high as hundreds of students gathered for an LGBT-supportive counter-event, “Love is Louder”.

Lines of students more than 100 deep circled the building for the event of music, food and speakers, according to Centre Daily Times. Meanwhile crowds of other students protested outside Milo Yiannopoulos’ venue, determined to drown out his message of hate.

“I wanted to make sure I could come out and help show that the overwhelming consensus at the university is that we don’t want [Yiannopoulos] here,” said Penn State junior James Locke, speaking to the publication.

However, they were vastly outnumbered by the pro-LGBT+ event, which organisers said was attended by more than 1,800 students – around seven times as many as Yiannopoulos’s supporters.

My daughter is protesting on campus tonight at PSU. The University has allowed MILO to hold a ‘Pray The Gay Away’ event. This event was partially funded by UPAC, with money directly from student tuition. Unacceptable!

The self-proclaimed “pop star of hate” eventually arrived at the venue an hour late and kicked off his speech to loud applause.

According to Centre Daily Times, which attended the event, the commentator “poked fun at his own weight gain, lampooned the LGBT+ community, asked one woman who shared her opinion where her husband was and jokingly told College Republicans to get out of the room – all in the first 15 minutes.”

He also thanked Penn State for its “generous donation” – nearly $18,000 for his attendance fee and $6,000 from donations and ticket sales – saying he planned to put it towards his conversion therapy clinic.

A Penn State spokesperson confirmed: “Like other events and speakers that are organised and sponsored by recognised student organisations, the student-led University Park Allocation Committee (UPAC), a viewpoint-neutral student group, approved and allocated funding from the Student Initiated Fee.”

Meanwhile, the “Love is Louder” crowd remained for the duration of the event, dancing, chanting and singing, handing out pizza and refreshments, while LGBT+ groups set up tables offering support services and “free mom hugs”.

Police were stationed outside the building for security, but a Penn State spokesperson said “there were no issues” and protesters were “civil and orderly.”

“As a transgender woman, it shows me that love is stronger than hate,” said third-year PhD student Sophie Kandler.

“The person they brought to campus today – who has a First Amendment right to be here – he’s about hate. He’s all about controversy; that’s what he does. This is about love.”