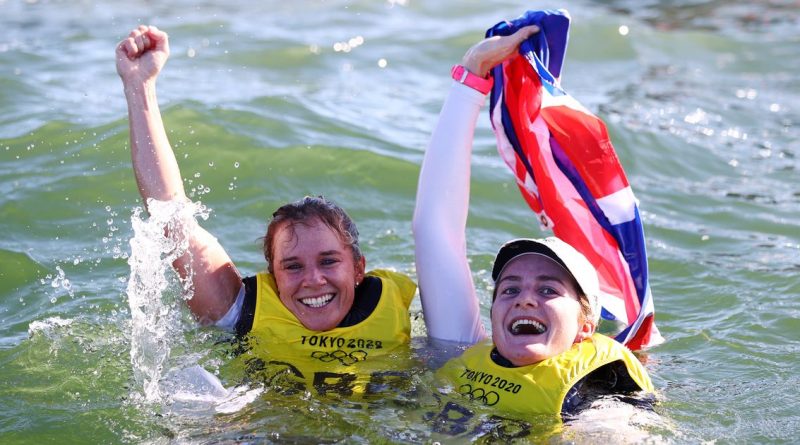 Hannah Mills last night lifted the lid on what it took to become the most successful female sailor in Olympic history.

The Welsh star had retained the women’s 470 title she won in Rio after a dominant campaign with Eilidh McIntyre in Sagami Bay.

She hugged her team mate before jumping into the sea with the Union Jack flag she had proudly carried for Team GB at the opening ceremony.

Coming ashore with a smile as wide as the gulf between Britain and their rivals at this regatta, she was awarded her second gold – and her third Olympic medal in all.

It was then she revealed: “This has been one of the hardest weeks of my life and I’m sure it has for Eilidh as well.

“Just every day, feeling sick, not being able to eat, just nerves building up and yeah, the emotion.

“But we’ve done it, we’ve done what we came here to do and it’s amazing.”

Mills: “This has been one of the hardest weeks of my life”
(

Mills, 33, had helmed the dinghy to silver in London before ruling the waves alongside Saskia Clark in Rio four years later.

They then split but any fear the magic would be lost was dispelled as Mills formed a new partnership with McIntyre and the pair quickly became world champions.

They did it on the same stretch of sea that yesterday bore witness to a triumph to set aside those of Giles Scott and the 49er boys the previous day.

“It’s mad, it’s absolutely mad,” Mills said of her history-making achievement. “Growing up you obviously dream of being here one day and standing on top of a podium.

“To do it twice, with Saskia before and Eilidh this time, I just feel really lucky. We’ve got a great team around us and the support has been phenomenal.”

That left them needing a top-seven finish and despite a post-race protest from France, their fifth place was enough to land the prize.

In their glory moment McIntyre, 27, burst into tears as the magnitude of what they had done sunk in.

The daughter of 1988 Olympic champion Mike, she had spent a lifetime looking at his gold medal in the family home and yearning to one day have her own.

McIntyre: “I’d like to thank my dad for being my inspiration”
(

“To be honest, I can’t believe this has happened,” she said. “To think that I’ve dreamt of this my entire life.

“I’d like to thank my dad for everything, for being my inspiration and for being at the end of the phone whenever I’ve wanted to talk.

“It’s really hit my whole family, my poor Mum who’s had to live through the stress of this twice now, and my sister and brother and fiancé John who have been my total rocks.

“It’s always been that nothing is good enough, but gold is enough and they’ve all been on this journey.”