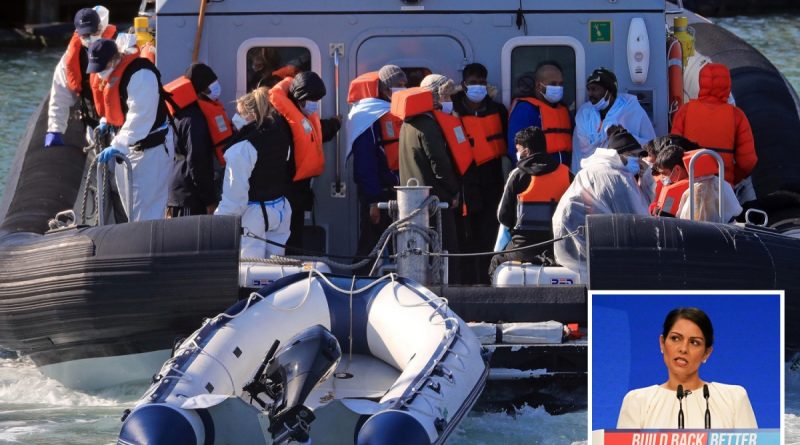 
PRITI Patel revealed in her conference speech she had called in the military to deal with the small boats crisis.

The Home Secretary confirmed for the first time that migrants crossing the Channel could be turned back by British forces.

She said: “Boris and I have worked intensively with every institution with a responsibility to protect our Borders — Border Force, the police, the National Crime Agency, maritime experts, and, yes, the military — to deliver operational solutions including new sea tactics.”

Ms Patel’s speech was met with whoops, applause and a standing ovation at the packed arena in Manchester yesterday.

She also vowed to crackdown on illegal immigration and promised to prioritise those who play by the rules, adding: “For the first time, how somebody arrives in the United Kingdom will impact how their asylum claim is processed.

“Our new laws will speed up the removal of those with no legal right to be in our country.

“France is a safe country, one not riven by war or conflict. There is no reason why any asylum seeker should come to the UK directly from France.

“I make no apology for securing our borders and exploring all options to save lives by ending these horrific journeys.”

She will beef up stop-and-search rules so that protesters can be held if suspected of carrying heavy-duty locks or industrial-strength glue near motorways, airports and ports.

Repeat offenders could be jailed for six months or get an unlimited fine by magistrates straight after arrest.

And she pledged to toughen sentences for the worst criminals, adding: “I will never flinch from taking the difficult decisions needed to keep our country safe and secure.”