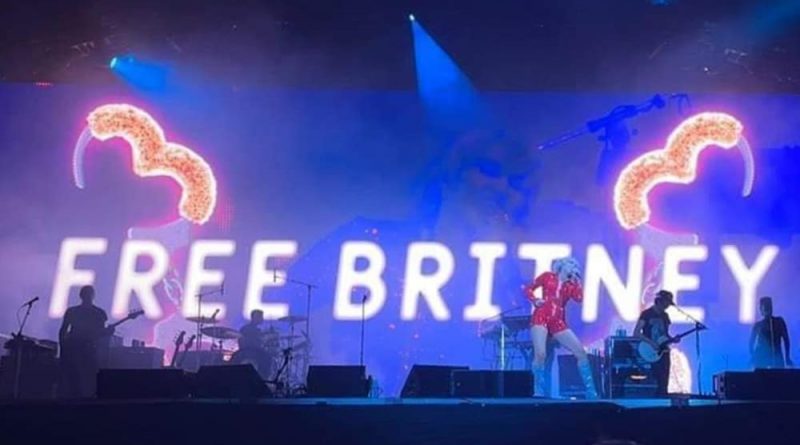 Miley Cyrus made no secret of her support for Britney Spears in an incredible headline Lollapalooza performance that had the crowd chanting “Free Britney”.

The “Wrecking Ball” singer dominated the festival’s opening night on Thursday (29 July) with a two-hour set that included appearances from G Herbo, Juicy J, Billy Idol, and The Kid Laroi.

Standing before an audience of thousands, Miley made sure to use her platform to champion Britney’s fight for conservatorship freedom.

She couldn’t resist performing her 2013 hit “SMS (Bangerz)” – complete with Britney’s pre-recorded vocals – as the hashtag “#freebritney” flashed on the jumbo screens behind her.

The words were accompanied by images of handcuffs, making it perfectly clear whose side Miley is on.

Spears came up again when the star performed “Party in the USA”, capping off the lyrics “and a Britney song was on” with another chant of “Free Britney”, which was echoed by the crowd.

Fans were thrilled to see such strong support for Britney’s conservatorship battle on the opening night of one of America’s biggest music festivals, and flooded to social media to share their love for Miley.

.@MileyCyrus is going to town with #FreeBritney – we love to see it!

“And a Britney song was on!”

Britney’s vocals during Miley Cyrus’ performance on Coachella with #FreeBritney on the screens! 🥺pic.twitter.com/4T9Q4LJk9k

Miley Cyrus is that person in your life that won’t give up on you, the way she loves unconditionally and stands up for those who are dealing with stuff is something to admire.

Miley is Britney biggest fan, and she has always shown support to her since first minute #FreeBritney pic.twitter.com/5899Bn9wvC

Cyrus, who knows the challenges of being a teen star, previously spoke out about Spears’ conservatorship at a concert in Las Vegas, shouting “Free Britney” during “Party in the USA” in place of the lyric about Jay-Z.

During her Lollapalooza performance she also took a moment to address the pandemic, the Chicago Sun-Times reports.

“It was humbling to be humanised together … experiencing the last year and a half with no division between us, all knowing the pain of being disconnected and the value of having one another in our lives,” she said.