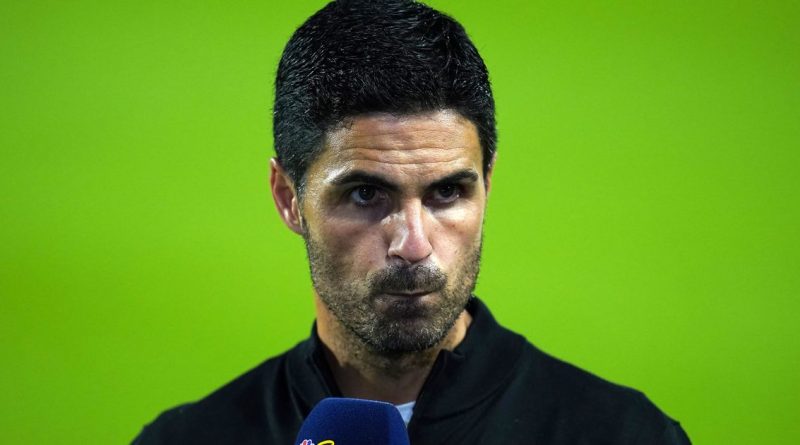 Mikel Arteta has been warned he faces the sack by new year – with former Arsenal star Charlie Nicholas saying “the fans have made up their mind”.

The Gunners have endured an awful start to the new Premier League season, having lost their opening three games to Brentford, Chelsea and Manchester City without scoring a goal.

A 6-0 thrashing of West Brom in the Carabao Cup provided a glimmer of hope, with Pierre-Emerick Aubameyang scoring a hat-trick against a second-string Baggies outfit.

But the manner of their capitulation against City a few days later was alarming, with Arsenal left bottom of the table following the 5-0 defeat in which they were two goals down after just 12 minutes.

As a result, the pressure on Arteta is growing as he prepares his side for next Saturday’s home clash against Norwich, who have also lost their opening three games and were similarly despatched 5-0 at the Etihad.

And Nicholas claims it may already be too late for Arteta – even though he feels the manager has “the right philosophy”.

although he believes the manager will be given until Christmas.

“I don’t think the crowd want him to stay,” said the ex-Gunners striker on the Where’s Jeff podcast.

But Nicholas questioned why William Saliba hasn’t been given a chance, with the defender now out on a third loan spell following his £20m signing from Saint-Etienne under Unai Emery’s watch two summers ago.

“Look, why would you sign Saliba and then send him out on loan when you have awful defenders at the club?” Nicholas said, adding he believes Arteta has until Christmas to prove himself.

Can Arteta turn it around at Arsenal? Have your say in the comments below

Arsenals Granit Xhaka leaves the pitch after being sent off during the Premier League match at the Etihad Stadium, Manchester. Picture date: Saturday August 28, 2021.

Nicholas also slammed Granit Xhaka, who was sent off for a reckless challenge on Joao Cancelo just 35 minutes into the Etihad drubbing.

The Switzerland international was believed to be close to joining Jose Mourinho’s Roma in the summer before signing a new deal with the Gunners.

“How he can manipulate Roma into paying £17m… I would’ve personally dropped him off there… And then he signs a new contract.

“When you look at the so-called captain in Xhaka, that’s a cop-out.”

Nicholas blasted Xhaka’s red card as “an absolute camouflage”, adding: “It just sums everything up about that football club.

“As much as I want to support Mikel Arteta, I’m finding is harder and harder to justify his choices.”