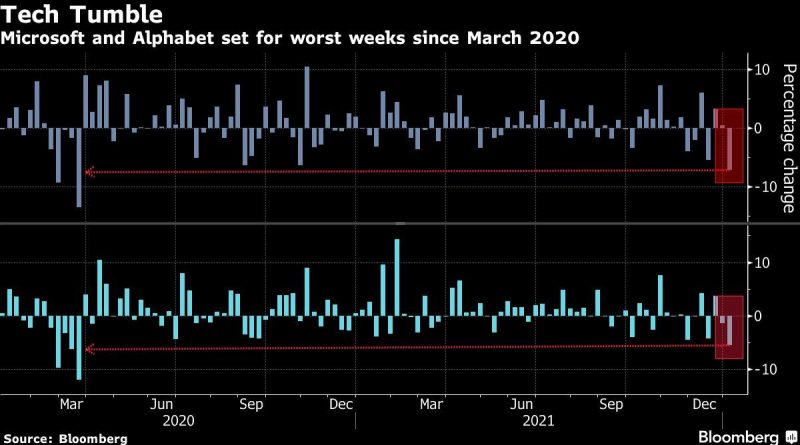 
(Bloomberg) — Alphabet Inc. fell on Friday, with the Google parent extending a drop that has resulted in its worst weekly performance since the start of the Covid-19 pandemic.

Shares fell 0.5% in their fourth straight negative session. For the week, it dropped 5.4%, its biggest weekly decline since March 2020. Microsoft Corp. ended Friday’s session with a gain of less than 0.1%, but it slipped 6.6% over the course of the week.

The weekly rout came amid a spike in U.S. bond yields, which broadly pressured high-growth names. The yield on the U.S. 10-year Treasury climbed to about 1.77% on Friday, its highest since January 2020, after trading as low as under 1.4% in December. Higher rates are seen as a headwind for high-growth and relatively expensive stocks as they reduce the present value of future earnings.

Trading on Friday was also impacted by the latest jobs report, which showed a drop in the unemployment rate and an increase in wages.

The iShares Expanded Tech-Software Sector ETF fell 0.8%. For the week, it fell 8.8% in its biggest drop since March 2020. The scale of the recent weakness has some analysts seeing value in the sector. Goldman Sachs wrote that “the group may be oversold,” given a positive view for demand trends in 2022.

For Microsoft and Alphabet, the rough start to 2022 comes after a year where both companies sharply outperformed. Alphabet gained 65% over the course of 2021, more than double the nearly 27% return of the Nasdaq 100 Index. Microsoft rose more than 50% last year, its 10th straight positive year, as well as its ninth straight year with a double-digit advance.