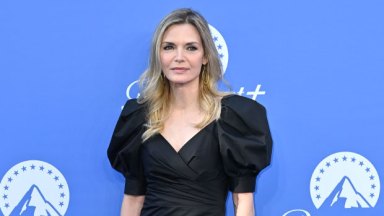 
Michelle Pfieffer made a rare — and completely breathtaking — red carpet appearance on Monday, June 20 for the Paramount+ UK launch! The Grease 2 beauty, 64, slayed in an elegant black midi dress with puff sleeves, and a wraparound waist design. She rocked matching black heels, along with simple gold hoop earrings, and wore her blonde hair long and wavy.

Michelle’s varied career has established her as both a beauty for the ages, and an exceptionally versatile actor. She starred in iconic roles in Grease 2, Scarface, Married to the Mob, The Witches of Eastwick, and Dangerous Liaisons. As she matured as an actress, she cemented her major box office appeal with leading roles in Hairspray and Stardust. And more recently, she took on an eclectic role in surreal 2020 comedy French Exit. She also took on a Showtime series, starring as Betty Ford in The First Lady.

In a 2021 interview, the mother of two attributed much of her success to simply being careful with the roles she took on. “I think I’ve always been kind of choosy, even when I had no business being choosy,” she told Indiewire. “I’m not sure why I have that arrogance, but I think there was definitely a shift at a time when I could afford to be choosy.”

She also said that she’s “always looking” for something in particular when she chooses a new role. “I’m always looking for something that just excites me, and this material did,” she told the outlet about her role in French Exit. “It was so unusual. I’d never read anything like it.”

Her standout, luminous beauty couldn’t hurt, either. The Batman Returns actress shared her process for getting in shape ahead of a return to her role as Janet Van Dyne in Ant-Man and the Wasp: Quantumania, which is set for release in February of 2023. “Janet van Dyne, entering the quantum realm this summer,” Michelle captioned a May 30, 2021, Instagram post, featuring a short video. “I’ll be ready,” she said as she stepped onto the treadmill.