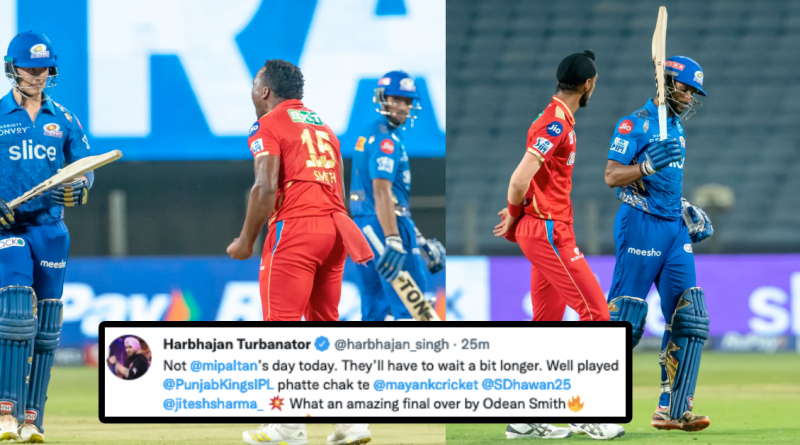 
The 5-time champions Mumbai Indians (MI) were subjected to another defeat, their 5th in a row in the IPL 2022 season, this time by Punjab Kings (PBKS) at the MCA Stadium in Pune on Wednesday.

Opting to bowl first, Mumbai let Shikhar Dhawan and Mayank Agarwal dictate the play. They put on 97 runs for the opening wicket in just 9 overs before Agarwal fell after a well-made 52 off 32 balls.

In response, Mumbai was off to a good start with the skipper, Rohit Sharma looking in fine touch. He raced away to 28 before being done in Kagiso Rabada. Dewald Brevis and Tilak Varma combined for the 3rd wicket and put up a masterclass.

Brevis smashed 28 runs off Rahul Chahar’s over, hitting 4 sixes in a row. Unfortunately, his dismissal triggered an all too familiar collapse. It was left to Suryakumar Yadav to take Mumbai home but there was only so much he could do.

Odean Smith took 4/30 while Rabada contributed with figures of 2/29. With the win, Punjab moves to 3rd place on the points table with 3 wins and 2 losses in five matches.

High time MI brings in their A game in their remaining matches.

Mumbai Indians, the 5 time IPL champions, now 0 from 5 wins in this year’s IPL and virtually out.

An appreciation tweet for Rahul Chahar who got hit for 29 runs in the first over, but then gave only 15 runs in next three overs. And he bowled most of them against the cricket giants like Pollard and Surya. 👏 #IPL #MIvsPBKS #TATA2022 pic.twitter.com/bCkmMy29SR

Has to be said. Arshdeep Singh is among the top 3-4 death bowlers in the IPL.

The big hug from captain Mayank Agarwal to Odean Smith. Mayank deserves all the credits for backing his players despite an unbelievable loss in the previous game. pic.twitter.com/oC1GvjUaNr

Mumbai Indians becomes the first team in IPL to lose first 5 matches of an IPL season twice (2014 and 2022).

What’s happening mi? Y not including Mayank markande still believe with you Murugan aswin ,must include one batter promot sky as an one down otherwise result happening remain same

Also Read – IPL 2022: If Umesh Yadav Keeps Performing, Can’t See Why He Would Not Do Well For India In T20Is – Tim Southee