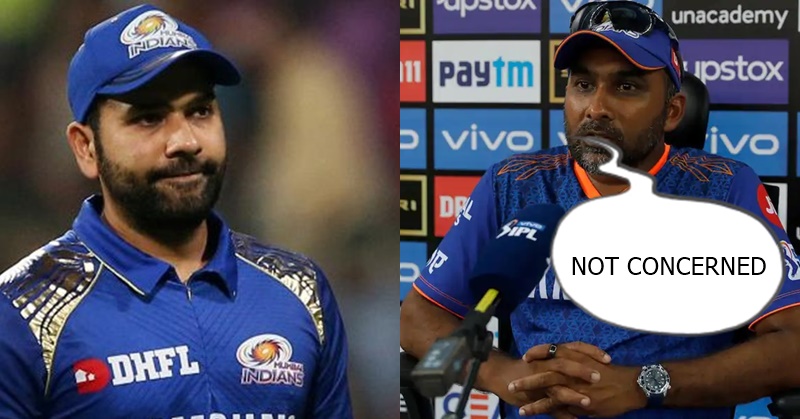 
Mumbai Indians head coach Mahela Jayawardene denied any concerns about skipper Rohit Sharma’s batting performance in the IPL 2022. Rohit has amassed 108 runs in five innings at 21.60 and a strike rate of 133.33.

In the match against Punjab Kings on Wednesday, Rohit started with a four and six off Vaibhav Arora in the first over of Mumbai Indians’ 199-run chase. The captain hammered a couple of boundaries and a six to Kagiso Rabada before falling to the same bowler in the fourth over for 17-ball 28.

Jayawardene acknowledged that Rohit hasn’t converted great starts into magnificent knocks but the head coach believes the skipper is just one big knock away from turning things around his potential.

“If you look at the way he starts, the way he hits the ball, it’s brilliant. He’s timing it, he’s getting some really, really good starts. Yes, he’s disappointed as well, that he’s not being able to convert them,” Jayawardene said in the post-match press conference.

“We’ve seen Rohit batting deep, batting for 14-15 overs and getting those big scores. It’s just a matter of time. He’s a quality player and I am not concerned about the form as such,” he added.

At one stage, Mumbai Indians seemed to accomplish the chase with utmost ease as young guns Dewald Brevis (49) and Tilak Varma (36) almost set the tone with an 84-run stand for the third wicket.

Brevis was the aggressor as he slammed four boundaries and five sixes in his 25-ball 49, he pummelled 28 runs against Punjab Kings spinner Rahul Chahar in the ninth over. The South African youngster missed his maiden IPL fifty by a whisker as he couldn’t pick the short ball off Odean Smith.

In the 13th over, Tilak Varma was run out by Mayank Agarwal and Arshdeep Singh at the non-striker’s end after a miscommunication with Suryakumar Yadav. Three overs later Kieron Pollard got run out despite being reluctant for the second run insisted by Suryakumar.

Suryakumar clobbered a couple of sixes to Vaibhav Arora but couldn’t finish the job for Mumbai Indians as he fell to Kagiso Rabada in the penultimate over. MI needed 22 runs in the final over. Jaydev Unadkat smashed Smith for a six on the first ball but the latter picked three wickets to defend the score.

Jayawardene clarified the decision to bat youngsters Brevis and Tilak ahead of Suryakumar as the latter was given the role of finishing the game along with Pollard.

“The two young guys, we know what they are capable of. So given them a bit of freedom to go and control that situation, so that Polly and Surya are able to chase that. That was the initial thinking. It’s a call that we will take depending on how we’ve set up tactically against certain opposition,” the MI head coach said.

Mumbai Indians will play Lucknow Super Giants (LSG) on April 16 at the Brabourne Stadium in Mumbai.