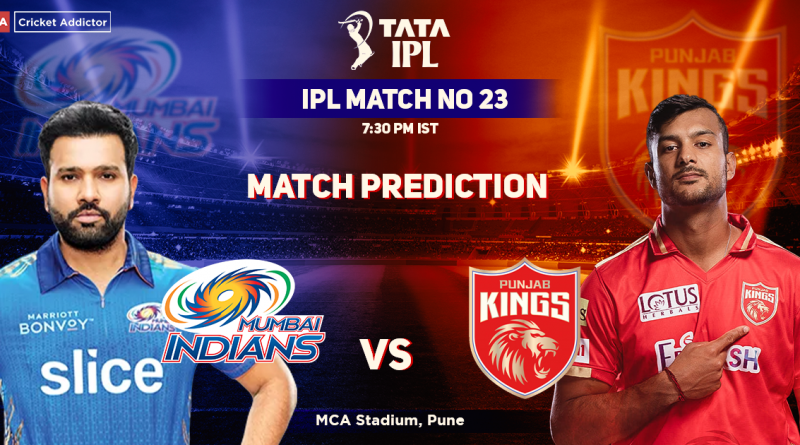 MI vs PBKS Match Prediction- Who Will Win Today’s IPL Match Between Mumbai Indians And Punjab Kings? IPL 2022, Match 23, MI vs PBKS. Punjab Kings and Mumbai Indians take on each other in match 23 of IPL 2022 In Pune on April 13. Both teams have played four games each so far. Mumbai have lost all four games while Punjab have won two and lost two. The match starts at 7.30 pm IST. So far in the 28 games played between both sides, Mumbai have won 15 while Punjab has 13.

Mumbai Indians find themselves in a must-win situation having lost their first four games. They have lost back-to-back matches in Pune and this is their third straight game at this venue. Mumbai have looked a bit puzzled with their squad. A few of their big-money buys have not stood up for the team so far. Rohit Sharma’s lack of form with the bat has added to the team’s misery. Their bowling attack has also gone for runs in the four games so far.

Punjab Kings lost their previous match against Gujarat Titans. Despite managing to build a good squad, they have not performed consistently for the franchise. Mayank Agarwal as captain has bagged a few low scores. This has put extra pressure on the middle and lower order. Their bowlers have not been able to get that consistency in their bowling as well. Having said that they are a mercurial side and capable of a comeback.

Records Of The MCA Stadium, Pune

Who Will Score Most Runs For PBKS–      Shikhar Dhawan/ Liam Livingstone

Who Will Take Most Wickets For PBKS –  Rahul Chahar / Kagiso Rabada

Who Will Take Most Wickets For MI-      Jasprit Bumrah/ Murugan Ashwin

Also Read: RR vs LSG: ‘It Was a Team Decision’: Sanju Samson On Ravichandran Ashwin’s Retired Out Against LSG