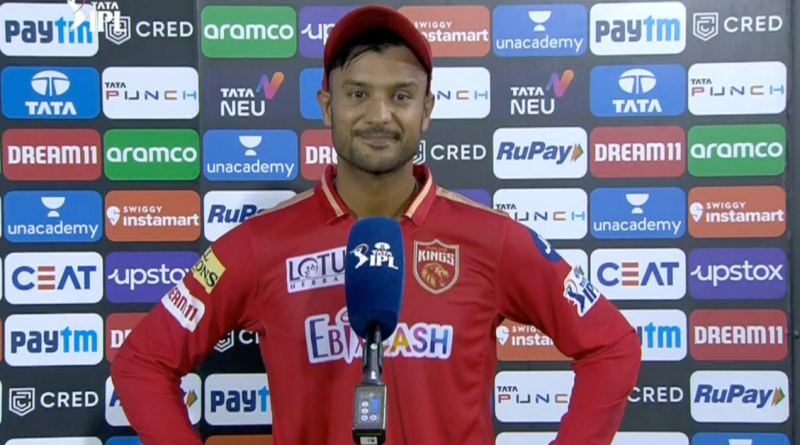 
Punjab Kings won their 3rd game of the season against Mumbai Indians at the MCA Stadium in Pune on Wednesday. Mayank Agarwal was a happy captain after the win.

They defeated the five-time champions by 12 runs and handed them their 5th loss of the season.

Punjab Posted A Big Total On The Board

PBKS posted 198 after having to put bat first. Mayank Agarwal and Shikhar Dhawan gave them a solid foundation with an opening stand of 97 runs in 9.3 overs.

Agarwal completed his first fifty of the season while Dhawan scored 70 runs. Late order hitting by Jitesh Sharma propelled Punjab to the par score of 198.

Although Punjab did lose Liam Livingstone and Jonny Bairstow for low scores, they still managed to put a big total on the board.

“At the start of the tournament, we said that’s the brand of cricket we want to play. We want to play aggressive, hard cricket, and with that, we need to show good intent. I think this time around we were a lot smarter with the bat as well.”

“So we showed great intent but we were a lot smarter so that we could keep wickets in hand and use the death as well. I thought in the last game against Gujarat, we gave wickets to Rashid when it wasn’t required. But this time we were a lot more aware and careful. We made sure to not give wickets to their main bowlers and if it’s your day, you have to take the team through,” Agarwal said in the post-match presentation after the game on his side’s batting approach.

Mumbai Indians after having lost two wickets were going nicely in the chase when Dewald Brewis and Tilak Varma were batting together, but once Brewis got out, Varma and Kieron Pollard just gifted their wickets away in the form of runouts.

“Obviously when Tilak and Brevis were going the way they were going, we had to change our strategy and get into the main bowlers to try to get a wicket and luckily that happened through a runout,” Agarwal said about the partnership between the two young batters.

Agarwal also praised his bowlers and said that he was happy with three wins from 5 games.

“We don’t rely on just Rabada, yes he leads the attack for us but we have two other guys to come and do that, It’s nice and very happy to have three wins. I think we’re playing good cricket overall and if we get 5-10% better every game, I think we’ll go on to do special things.”

PBKS are now third on the points table with 3 wins from 5 games.