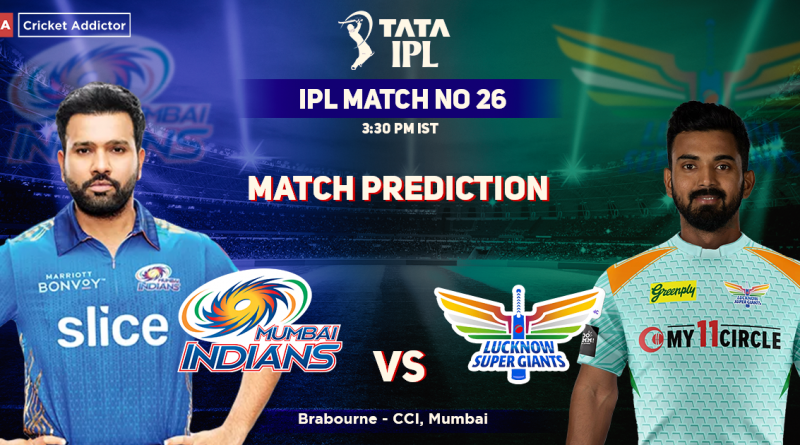 Also Read: MI vs PBKS: At One Stage We Were Cruising, But Credit To PBKS For The Way They Bowled At The Back End – Rohit Sharma

For Mumbai, Dewald Brevis slammed 49 runs for the team. Tilak Varma scored 36 while Suryakumar Yadav added 43. However, Mumbai Indians could only reach 186-9 till the end and lost the match by 12 runs. Odena Smith scalped 4 wickets to bag the man of the match award.

Later, Lucknow Super Giants lost their opener KL Rahul for a duck. Quinton de Kock scored 29 runs for the team as LSG lost a few quick wickets in the middle. Marcus Stoinis slammed quick 38 runs towards the end but LSG remained short of 3 runs for victory.

Mumbai Indians and Lucknow Suer Giants will lock horns for the first-ever time in IPL 2022.

The team winning the toss might aim to bowl first. Since stadiums in Mumbai are more batting-friendly, chasing has been a good option for teams. Most of the teams have opted to bowl first in IPL 2022 so far due to the dew factor which helps the team batting in the 2nd innings.

Who will score the most runs for MI in the match: Ishan Kishan or Sruyakumar Yadav

Also Read: MI vs PBKS: Watch – Tilak Varma Abuses In Frustration After Being Ran Out By Suryakumar Yadav

Who will pick the most wickets for MI in the match: Tymal Mills or Murugan Ashwin

Who will score the most runs for LSG in the match: Quinton de Kock or Deepak Hooda

Who will the pick most wickets for LSG in the match: Avesh Khan or Ravi Bishnoi