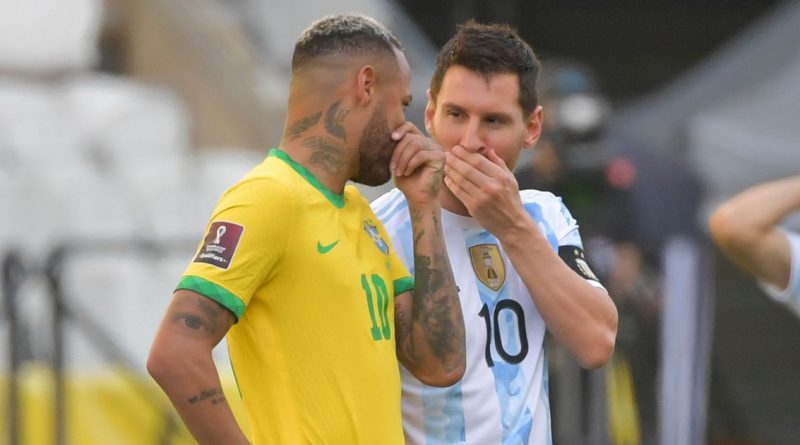 Lionel Messi has made his frustrations known after Argentina’s clash with Brazil was stopped by health officials.

The World Cup qualifier at Corinthians’ Neo Quimica Arena was halted after 10 minutes due to a row over Covid documents.

Premier League quartet Emiliano Buendia, Emiliano Martinez, Giovani Lo Celso and Cristian Romero are under scrutiny after being accused of ‘lying’ on documents they filled out on entry to the country.

That is despite the Federal Government, FIFA and Conmebol striking an agreement that allowed the four players to feature, according to ESPN Brasil.

Brazilian’s health authority Anvisa came onto the pitch alongside police officers to reportedly demand the game be stopped until the four players were off the field and detained.

Lionel Messi was angered by the events in Brazil

Messi, Argentina’s captain, was left frustrated by the scenario, which he felt should’ve been addressed much earlier.

He said, according to RMC Sport: “We’ve been here for three days, we were waiting to play the match, why didn’t you come earlier?”

Before adding: “This is a mess, we’re off”

The match has been abandoned.

Argentine FA chief Claudio Tapia said: “Here you can’t talk about any lie because there is a health legislation under which all South American tournaments are played. The health authorities of each country approved a protocol that we have been complying with to the maximum.

“What was experienced today is regrettable for football, it is a very bad image. Four people came in to interrupt the match to make a notification and Conmebol asked the players to go to the locker room.”

Government rules in Brazil state that anyone entering the country having recently been in the UK must observe a period of 14 days’ isolation.

Yet the aforementioned Argentine quartet supposedly didn’t stated that they had been in the UK and were subsequently under investigation.

They stated that they had been in their homeland and Venezuela before entering Brazil, according to the Mail.

The World Cup qualifier was eventually called off
(

The Argentina squad arrived in Brazil on Friday following their win in Venezuela and authorities felt the four players were exempt due to being part of their secure bubble, as is indicted by CONMEBOL.

“These players arrived in Brazil on a flight from Caracas,” Brazil’s health regulator Anvisa said. “The flight landed in Guarulhos (Sao Paulo).

“They declared that they had not been in any of the four countries which are restricted for the past 14 days. Anvisa was warned about supposedly false information given by these players.

“After that, Anvisa sent a notification to CIEVS (in charge of Sao Paolo’s Covid-19 restrictions). We have to clarify that false information given to Brazilian authorities might be infractions of health laws of the country and might be an infraction of our criminal law.”