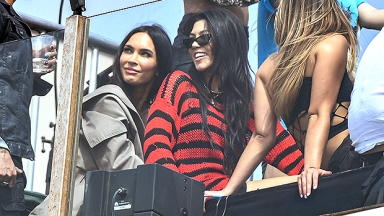 
Machine Gun Kelly (b. Colson Baker, 32) resumes his Mainstream Sellout tour in September, and when he does, Kourtney Kardashian will be ready. Her husband, Travis Barker, performed with MGK on three dates of the North American leg of the tour, and Kourtney, 43, was his proud “tour wife.” For the Kardashians alum, it’s been a chance to get a glimpse into Travis’s world and live a different kind of life – and she got a crash course on it via Megan Fox. “Megan has tagged along with Colson on numerous performances before, so although she’s not with them at the moment,” a KarJenner source tells HollywoodLife EXCLUSIVELY, “she gave Kourtney plenty of advice before hitting the road.”

Megan, 36, told Kourtney “how to properly pack for the road, but how to stay connected with their kids when they’re away,” the source shares with HollywoodLife. “It’s nothing really new for Kourtney, but she thought it was super sweet that Megan took the time to show she cares. Kourtney is happy to return home soon and see her kids.”

“Although Kourtney has known Travis for years, she’s never experienced what life was like while traveling on the road with him,” the insider continues. “Sure, it’s only a couple of shows, but she [loved] every moment. It’s a whole different side of Travis that she’s seen, and she thinks it’s so hot. Kourtney is so thankful she can tag along with Travis, and she jokingly calls herself a groupie all the time. She’s happy to be by his side so soon after his health scare, and she’s so proud he pushed through even with a broken thumb. Kourtney is having the time of her life and soaking up every moment.”

At this time, it’s unclear if Travis will make the overseas flight to play drums on the European leg of the Mainstream Sellout tour. The tour resumes on Sept. 17 in Cologne, Germany, and from there, it hits a handful of the major Western European cities – Zurich, Paris, London, Glasgow, Dublin, Amsterdam, etc. If Travis does decide to make a few of the dates, expect Kourt to join him for a European road trip.

“Kourtney has the best time going on tour with Travis,” a second KarJenner source tells HollywoodLife EXCLUSIVELY. “It was thrilling to experience the rock star life. She’s had her own fame for so long and is used to screaming fans, but the rush of this was on a whole different level. She’s so damn proud to be Mrs. Travis Barker, she loved being on tour, and she’s encouraging Travis to do more shows so she can go on tour again.”