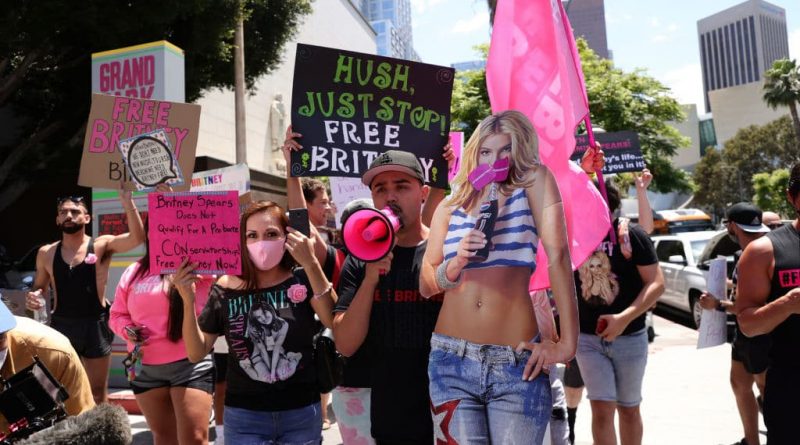 Free Britney activists says their fight won’t end when the star is freed from her conservatorship: “People need to be held accountable.”

Junior Olivas cried tears of joy when Britney Spears’ father was finally removed from her conservatorship in September.

It was a redemptive moment for Junior, who has spent years fighting tirelessly for the woman whose songs had made such an impact on him to be granted control over her life once more.

“I just kept thinking: ‘Britney must be so ecstatic right now – the weight that’s been lifted off her shoulders,’” Junior tells PinkNews. “She never wanted to be in this to begin with and she never wanted him involved. I personally feel like the justice system failed her.

“I was just so happy that finally, she was being heard. We were being heard. I cannot wait for Britney to be free from the entire thing.”

It was a momentous occasion for Britney – but it was also a remarkable moment for fans behind the Free Britney movement, which has spent years drawing attention to the controversial legal arrangement she has been living under since 2008.

By now, that story is well worn – after suffering what appeared to be a mental health crisis in 2008, Britney was placed under a conservatorship by the courts. That arrangement meant that her father and a team of people were granted significant control over her life, from her finances to her personal decisions.

Later that year, the MTV documentary For the Record was released – and fans were instantly worried when they heard her speak about feeling “imprisoned”. But then everything seemed to settle down for Britney. Her career went from strength to strength and she seemed happy and content.

Everything changed in 2019 when the podcast Britney’s Gram shared a voicemail reportedly from a paralegal which claimed that Britney had been forced into a mental health facility against her will. Fans were horrified – and Junior knew he had to take action.

“As soon as I heard that voicemail, I already knew, I didn’t second guess it, I knew she needed help,” Junior says. “I was actually one of the first people who helped organise the Free Britney rally. I didn’t know what I was doing to be honest, I just knew she needed help. We got maybe 15 fans and we headed over to a random courthouse.”

The protest, and the Free Britney movement that was born out of that moment, did not go down well. “Of course we got called crazy, but we were expecting that,” Junior says. “From there, every single day for the last three years I’ve been involved heavily.”

For so long, the Free Britney movement was treated as some kind of a joke – Jamie Spears and his legal team referred to them as “conspiracy theorists” – and nobody seemed to be taking the issue seriously. But gradually, as time went by, the tide started to change – and then came the moment that changed everything.

In June, the world heard Britney speak out against her conservatorship for the first time in a virtual court appearance. She characterised the arrangement as “abusive” and claimed she had been denied the right to marry her boyfriend Sam Asghari and start a family with him.

“I wasn’t sure that Britney would be given the chance to speak out publicly and that we would be able to hear her, because everything’s been sealed for so many years,” Junior says. “The way it played out for the world to hear her in her own words say everything we’ve been screaming for years – oh my god, it was vindicating. As soon as Britney spoke, I knew that was the turning point. I knew that was the beginning of the end of this.”

Britney’s struggle highlights the problem with conservatorships: ‘It can happen to anyone’

It was also a powerful moment for Amanda Eck, another one of the activists involved in the Free Britney movement. “My heart was just breaking the whole time, but the second she talked about the IUD, I just fell to my knees crying,” she tells PinkNews (Britney has alleged that her conservatorship forbade her from removing an IUD, or contraceptive device, so that she could try for a baby).

“This woman who I know taught me and our generation to embrace their sexuality and not be ashamed of it now had no reproductive rights, and that did not sit well with me at all.”

Amanda’s reasons for getting involved in the Free Britney movement were deeply personal. She has been a fan of Britney’s music ever since she was five years old, but it was the release of Crossroads that really cemented her love for the singer.

“I was raised by a single father – my mother had left us the summer before Britney made it big. So I was listening to my dad’s bands, and he was like: ‘You need your own taste in music. So we would watch TRL countdown and he would show me who was popular at the time, and he was like: ‘Pick one, any. Who do you like?’ I just fell in love with Britney, and he went out and bought me her CD and eventually her dolls and just tried to help me develop my own taste in music.

“Then, two years later, she starred in Crossroads, and in that movie her mom left her.”

“Every conservatorship case is different, but my great grandmother, the situation she was in was abusive as well,” Eck explains. “That really pushed me to be loud and vocal about it because if it can happen to Britney, it can happen to anyone.”

Since then, Amanda – who lives in Kansas – has flown to Los Angeles three times for Free Britney rallies and to show her support for the singer.

Since then, Britney has thanked fans for fighting for her freedom. Amanda becomes emotional when asked what it felt like to see her idol thanking the Free Britney movement for their solidarity.

“Britney doesn’t owe me or anyone anything at this point, but to get a thank you? That was all I really wanted,” she says. “It was just such a proud feeling of, I’m so glad that she knows the love.

“It’s not about her music, and honestly, it probably never has been. Her music’s great, and her performing is a bonus, but I think we fell in love with her because of who she is. She’s so kind and sweet. It was just being proud that she recognised how much we just love her and how much we want her to be happy doing whatever the hell she wants to do with her life.”

Amanda is now hoping that Britney will be granted full freedom and that the conservatorship will be terminated at her court date on Friday (12 November).

“Let’s get this over with,” she says. “I want her to do whatever she wants – if that’s getting married and having more babies, spending time with her boys, whatever it is. But also, I really, really want to see people being held accountable for the stuff that they did, because it’s not OK.

“The fight’s not going to end if she’s just freed, because I want to see people answering some questions.”