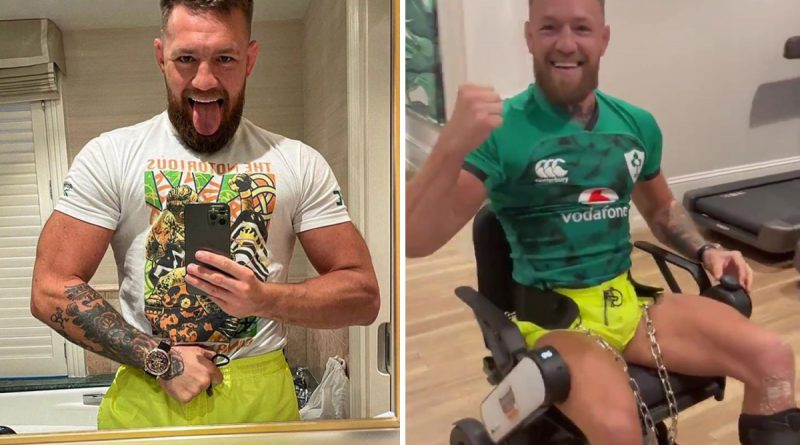 
CONOR McGREGOR claimed he has made ‘billions’ fighting across three weights in the UFC as he did pull-ups despite his broken leg.

McGregor, who became the first to hold two UFC belts at the same time, has knockout wins at featherweight, lightweight and welterweight.

And the UFC’s highest-paid star – who topped Forbes’ rich list with £128m earned in the last 12 months – reminded fans of his record.

Posing in the mirror, posted on Twitter: “This the face you make when you’ve sparked them across 3 weight divisions and made billions doin it.”

McGregor, who is out in California where he owns a property and a gym, was then seemingly inspired to train, despite his leg injury.

He uploaded a video performing pull-ups and captioned: “Let nothing stop you!”

The Irishman, 33, is nursing a broken tibia he sustained in the dying seconds of the first round in his trilogy bout with Dustin Poirier, 32, in July.

McGregor as a result, was beaten by doctor stoppage and has since been handed a six-month medical suspension.

He then underwent surgery immediately in Los Angeles, where he has since stayed to rest and recover with his family.

UFC president Dana White has predicted the former two-weight champion will be out for a year.

And McGregor’s injury has sidelined him from a charity boxing match against impressionist Al Foran in September.

Instead, he plans to push the bout back between October – December and will instead face funny man Foran – who often mimics him – in a wheelchair bout.

McGregor tweeted: “Guys, the September date is too early for me. I am still in recovery.

“My docs/physical therapy team out here advice me to stay. I reckon late October at earliest.

“But maybe November/December too. It is hard to say at this time a concrete date. But I’m in! Wait for me please!”