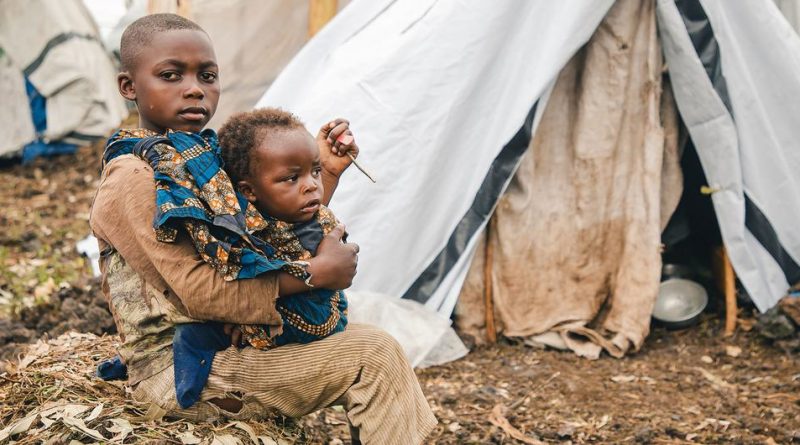 “Internally Displaced camps are fraught with danger”, said UNICEF Emergency Manager Dounia Dekhili. “In addition to the cholera threat, children and young people are at risk of experiencing gender-based violence in the extremely cramped camps”.

Since 20 October, intensified fighting has displaced thousands from Rutshuru territory in North Kivu province mainly to Kanyaruchinya and Kibati, north of the city of Goma and to Lubero territory.

The conflict is triggering massive population movement to the north and south along the Rutshuru-Goma axis.

The newly displaced are joining the ranks of about 200,000 IDPs forced to flee their homes since late March when the latest surge in violence began.

Over the last 10 days, about 100,000 displaced people have fled to desperately overcrowded makeshift camps in the towns of Goma and Lubero, where flimsy shelters are no protection from frequent rainstorms.

Moreover, many lack tarpaulins and must sleep in the open and clean water shortages threaten a cholera epidemic.

“There are nearly 190 children who have been separated from their families or caregivers during the chaos of recent displacements and so far, we have reunited about 80 with their families in Nyiragongo territory alone”, said Ms. Dekhili.

“The likelihood is that more unaccompanied children…will almost certainly materialize as the crisis unfolds…It is no exaggeration to say that the lives of thousands of people who live in these camps are in grave danger”.

Despite the volatile and unpredictable environment, UNICEF and partners continue to provide child protection, health and nutrition services to the most vulnerable. And in the longer term, efforts are underway to reopen schools.

To avert severe malnutrition, emergency health and nutrition care is being provided to IDPs and the host community and, so far, 200 households have received UNICEF assistance to prevent cholera.

“The priorities now are to provide access to safe water and sanitation, to work with sister agencies and partners to deliver food and to improve the quality of shelters”, said UNICEF Goma Field Office chief Jean Metenier.

“We call on all parties to the conflict to refrain from violence, protect children and their parents and pursue peace. The suffering here has to end immediately”.

At the same time, the Department of Peace Operations said that the UN Stabilization Mission in the DRC (MONUSCO) has evacuated 150 people threatened by hostilities involving M23 fighters.

They were flown in North Kivu, by helicopter from Kiwanja to Goma.

The Mission also conducted medical training and donated medicine to the hospital in Bunia for displaced people as well as to victims of armed violence.

For example, in Ituri province, it is training journalists from three radio stations on how to deal with disinformation and misinformation; as well as working with the police on crowd control.