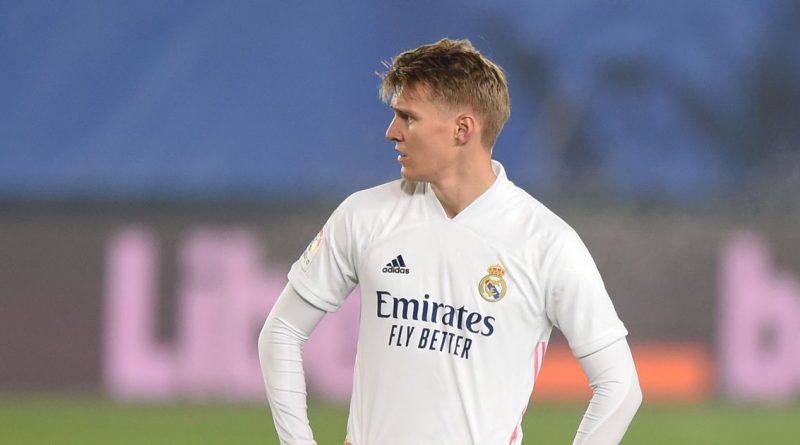 Martin Odegaard is reportedly ‘unsettled’ at Real Madrid and considering a return to Arsenal.

The 22-year-old spent the second half of last season at the Emirates after struggling for game time at the Santiago Bernabeu under Zinedine Zidane.

That followed an impressive loan spell at Real Sociedad in 2019-20 but even a change of manager in Madrid with Carlo Ancelotti coming in seems to not have resolved his issues.

The Norweigan joined Los Blancos as a 16-year-old in 2015 for €3million (£2.6m) but has failed to cement himself in Real’s XI since, spending time with Dutch sides Heerenveen and Vitesse before returning to La Liga.

His loan spell at Sociedad was cut short due to his dazzling displays but was shipped out to north London in January as Mikel Arteta attempted to add some attacking impetus into his struggling team.

Scoring twice in 20 appearances, Odegaard’s time with the Gunners was productive.

However, it may not be over yet.

According to Cadena SER, the playmaker has looked ‘disconnected’ with his team-mates during pre-season, having started in Real’s loss to Rangers at Ibrox last Sunday.

They claim Odegaard isn’t 100 per cent happy in Madrid and is now considering his future – with the prospect of a return to Arsenal open.

Speaking last month, Odegaard told native broadcaster TV2: “Of course it has always been a dream to play there [at the Bernabeu].

“I have been in the club for over six years now, and that has always been the goal,” he stated.

“I always want to play, I have said that all the time. Playing hard is important.”

There has been speculation surrounding what Ancelotti makes of the creator, who made controversial comments in his 2016 book Quiet Leadership, with Odegaard signed during his reign.

Would Odegaard returning be good news for Arsenal? Comment your thoughts below.

The Italian wrote: “When Real Madrid decided to sign a boy from Norway, 16-year-old Martin Odegaard, I thought, ‘I do not care if he comes or not, because he will not play for me now’.”

After the Gunners’ final game victory over Brighton & Hove Albion, manager Mikel Arteta admitted he didn’t know if the loanee would and that it wasn’t in his hands.

“Well, we have a very clear and strong opinion on what we would like to do. He’s not our player.

“We’ll have discussions in the next few weeks, but first of all we need to respect that he’s a Real Madrid player. We’ll have those communications.”

Arteta added: “We’ve tried to make everything that we could to get Martin performing for the team, which I think he’s done, and he has adapted really well to our way of playing and to our football club.

“Hopefully, we have given him the hope and the feeling that this could be a good place for him.”