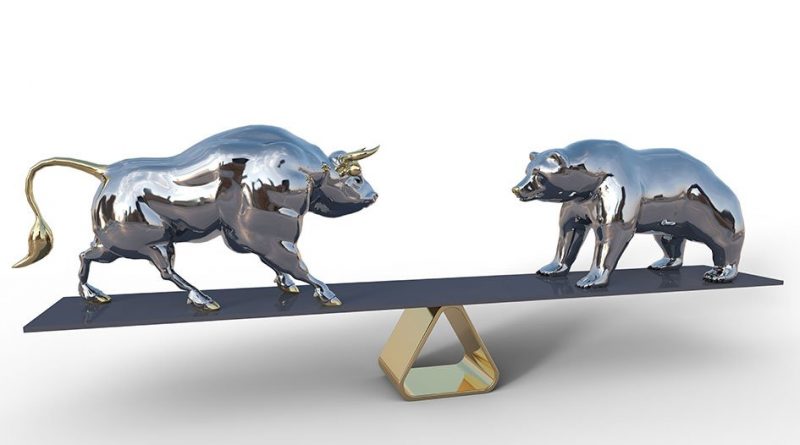 Investors should remain cautious, but also prepare for new buying opportunities. Pay attention to several key earnings this coming week. Google parent Alphabet (GOOGL), Ford Motor (F), Qualcomm (QCOM), Fortinet (FTNT) and Advanced Micro Devices (AMD) are five notable reports. All of these charts have had a rough stretch, though Google stock could be actionable soon. Ford stock, Qualcomm and Fortinet aren’t plunging vs. the broader market. AMD stock is a former chip leader that is trying to find a bottom.

The video embedded in this article discussed the volatile market action and analyzed Apple stock, Microsoft and Ford.

Remember that overnight action in Dow futures and elsewhere doesn’t necessarily translate into actual trading in the next regular stock market session.

New Covid cases have clearly topped in the U.S., although they are still very high. Hospitalizations also may have peaked nationwide.

No Federal Reserve ‘Put’ For Stocks

The Federal Reserve plans to raise interest rates and cut its balance sheet fairly aggressively in the coming months. Over the past several decades, Fed rate hikes generally have been discretionary, and policymakers were quick to pause or reverse course if financial markets faltered. But with inflation at 40-year highs, Fed chief Jerome Powell and his colleagues have made it clear that this time they are not going to stop just because stocks are struggling somewhat. If the economy falters, that’s a different story — the Fed is not going to adopt a Paul Volcker-esque stance — but there’s no “Powell put” for the market.

A rising rate environment could be tricky for stocks indefinitely, especially for highly valued growth stocks.

Apple stock jumped 7% on Friday to 170.33 in the heaviest volume in 15 months following strong earnings and optimism about future growth. Shares are back above the 50-day line and are already breaking a steep trend line.

One big positive: The relative strength line is at a record high after barely dipping in the prior few weeks, according to MarketSmith analysis. That’s a sign of how well Apple stock is holding up vs. the S&P 500 index.

In a strong market AAPL stock would be flashing multiple buy signals.

With a relatively modest price-to-earnings ratio and rock-solid institutional support, AAPL stock may fare better in a Fed tightening cycle than most tech names.

Microsoft stock also rallied on earnings and advanced 4.1% for the week to 308.26. MSFT stock reclaimed its 200-day line. That could offer an opportunity for investors to buy Microsoft stock as a Long-Term Leader. Investors could wait for MSFT stock to nudge a little higher, getting above Wednesday’s intraday high, which would also coincide roughly with retaking the 21-day line and breaking a downtrend.

The RS line came off highs in late 2021 and early January, but didn’t collapse, and is perking up again.

MSFT stock’s P-E ratio is higher than Apple’s but isn’t extreme. Also, Microsoft earnings growth estimates are stronger than that of its fellow tech titan.

TSLA stock plunged 10.3% last week to 846.35 as investors reacted negatively to the Tesla earnings call despite the strong results. On Friday, shares tumbled to 792.07, undercutting their 200-day moving average, but did rally to close up 2.1%.

Can TSLA stock hold this key level? That may depend on the market direction, but there’s no doubt that high P-E stocks are having a tough time.

Recent buyers should have exited Tesla stock long ago, but a decisive break of the 200-day line would be a strong sell signal for longer-term investors. Investors with a very low cost basis and high conviction in TSLA stock can choose to hold for the long run, but there is always a risk in sitting on huge winners as they begin to break down.

Google earnings are due Tuesday night. Google stock rose 3.4% on Friday to 2,667.02, just below its 200-day line. Retaking that level could offer an early entry for GOOGL stock as a Long-Term Leader.

Fortinet earnings are Thursday night. FTNT stock fell 2.25% last week, sliding below the 200-day line, even with Friday’s 4.6% rebound. While a Long-Term Leader like Microsoft and Google, Fortinet stock showed a much steeper drop and likely needs more time to repair before starting a new position.

Ford earnings are Thursday night, which along with General Motors (GM) earnings earlier in the week could offer some guidance regarding the outlook for auto production and EV rollouts as chip shortages gradually ease. After clearing several weeks of tight action at year-end and early January, Ford stock has plunged over the past couple of weeks, down 5.4% last week. Can the auto giant and emerging EV play start to rebound and retake the 50-day line? That would be a good sign, though Ford stock has no obvious buy point in sight.

Qualcomm earnings are Wednesday night. QCOM stock is trying to find a bottom, with a number of whipsaw moves that saw shares end up 1.1% for the week. That’s after tumbling from a messy consolidation in the prior week. The RS line for QCOM stock isn’t far from highs, so the chipmaker is one to watch. But it has no clear buy point.

AMD earnings are Tuesday night. AMD stock peaked in November and has sold off hard in 2022, tumbling through the 200-day line. Regaining that level would be a key step for AMD stock, but it’s got a long road to recovery.

Unlike the prior week, bulls put up a fight this past week. A market rally attempt began Monday with an impressive rebound from heavy losses. But in the days that followed, the market has shown a lot of volatility, but no clear direction. Still, the major indexes did snap weekly losing streaks.

After several ups and downs, the S&P 500 and Nasdaq closed with strong price gains Friday. Nasdaq volume fell slightly vs. Thursday, so the tech-heavy index did not stage a follow-through day to confirm the new rally.

The S&P 500 did rally above Monday’s high, closing a hair below its 200-day line. But NYSE volume was a whisker below Thursday’s level.

A follow-through day could still happen next week.

Even if Friday were a FTD, there would have been plenty of caveats. Not all confirmed market rallies work. A new uptrend heading into an aggressive rate-hiking cycle might have higher odds of failure.

The S&P 500 moving above the 200-day line and the Nasdaq clearing the 14,000 level would seem to be minimum level to feel some confidence in the market rally. From that perspective, Friday’s market gains could be viewed as a “setup day” for a true FTD next week.

The lack of stocks to buy also raises concerns. While some stocks might offer various entries soon after a market rally, there are a lot of heavily damaged charts out there.

The whipsaw market action means that stocks that could look enticing could look terrible a few hours or days later. Was Friday’s action the sign of something real, or did the market just have the good luck to close at a high point in a whipsaw trading range?

What To Do Now

Wall Street is in New York City, but investors should be living, at least mentally, in Missouri, the “show me” state. Wait for the major indexes and stocks to show you that they are looking healthy.

If and when there is a confirmed market rally, retain a healthy level of skepticism to start.

For now, build up your watchlists. If the market rally is on the verge of signaling strength, you want to be ready to act. Look for stocks like Apple and others with strong relative strength.

When you do get the all-clear signal from the market, remain in that “show me” state of mind. Gradually build up your exposure as your positions and the broader market move higher.

Read The Big Picture every day to stay in sync with the market direction and leading stocks and sectors.

How To Spot Stock Market Tops

When It’s Time To Sell Your Favorite Stock

See Stocks On The List Of Market Leaders With IBD Leaderboard