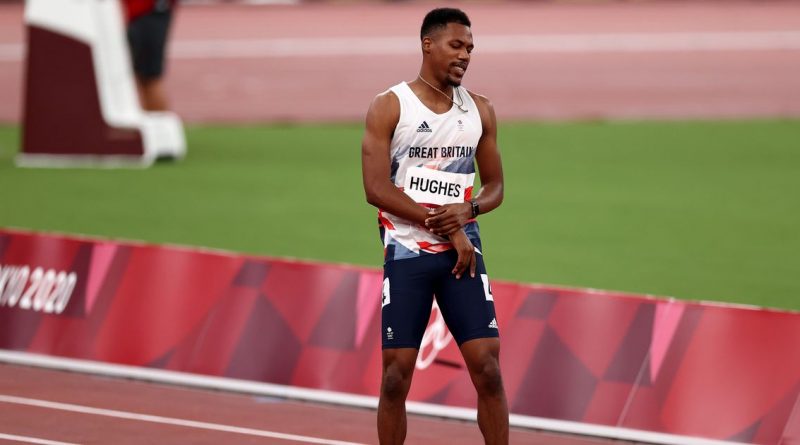 ‘My left calf cramped up when I went on my set position. It was so severe I couldn’t stay in my blocks. It wasn’t pressure, I wasn’t nervous’

Zharnel Hughes blew his chance to succeed Usain Bolt as Olympic champion with a calamitous false start in Tokyo.

But he jumped the gun after an attack of cramp in the starting blocks – and an Italian former long jumper won the race instead.

Hughes revealed: “My left calf cramped up when I went on my set position. It was so severe I couldn’t stay in my blocks. It wasn’t pressure, I wasn’t nervous.”

Marcell Jacobs, who only broke 10 seconds for the first time in May, took gold in 9.80secs.

“I’m really heartbroken,” added Hughes, who won his semi-final easing up in 9.98secs. “I know for a fact I would have medalled. I know that for a fact. I was so ready.”

Make no mistake this was the chance of a lifetime.

World champion Christian Coleman is serving a ban for missing three drugs tests in a year, Justin Gatlin failed to make the US team and Trayvon Bromell, this year’s fastest man, bombed out in the semi-finals.

If it was a horror show for Hughes it was equally so for a Team GB athletics squad already reeling from Dina Asher-Hughes failing to make her 100m final.

She is also out of the 200m, though she has indicated she wants to compete in the relay later this week.

Highly rated British 800m duo Elliot Giles and Dan Rowden failed to get past the semi-finals, as did sprinter Reece Prescod – another DQd for a false start.

Factor in the question mark hanging over the fitness of Katarina Johnson-Thompson, who starts her heptathlon Wednesday, and it is obvious why so much hope was invested in Hughes.

“Listen, I cannot take it back, it is a story which is written already,” said the 26-year-old, who also false-started in the British final in June.

“I’m sorry this had to happen like this, but it did. I know I am a champion deep down.”

But Jacobs, a man nobody tipped, has the title instead, having clocked a time faster than Bolt ran to win in Rio.

The Texas-born son of an Italian mother and American father, a man who switched to sprinting only because his knees could no longer take long jumping.

“It’s a dream, a dream,” said the new champion, who goes by the name @crazylongjumper on social media.

Crazy is the word.