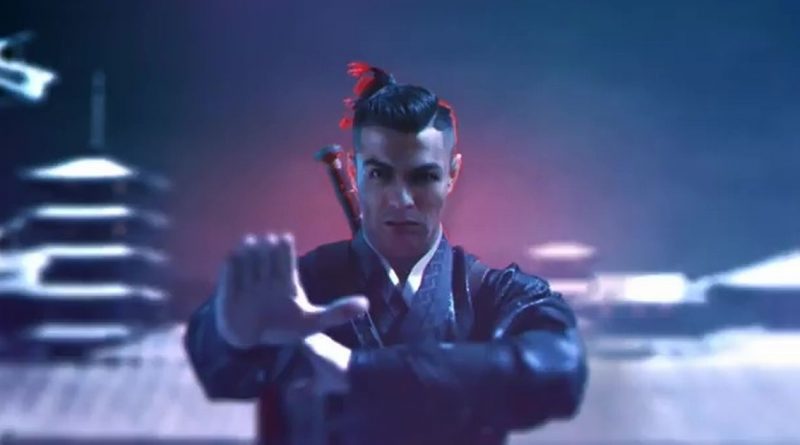 For all the headlines the 36-year-old has made since returning to Old Trafford, this is certainly the most left-field.

After teaming up with Salford City and Valencia shareholder Peter Lim, Ronaldo has featured in an advert for Asian tech company ZujuGP, ‘showcasing’ his fighting skills.

The commercial sees the Red Devils No.7 – or at least a CGI version of him – kick away his enemies’ swords and fire, before pulling out his trademark celebration to vanquish them and walking away with a branded umbrella.

Ronaldo showed off his ninja skills in a bizarre new advert
(

Well, in 2015, Lim’s company, Mint Media, acquired Ronaldo’s coveted image rights – aside from those generated by the club in which he is employed by, now United.

And the Portuguese legend announced on Monday that his new business with Lim will be a platform that aims to unite football, technology and communication.

“You will never see football in the same way again,” a company statement read.

The advert comes off the heels of Ronaldo making history (again) while on international duty.

CGI Ronaldo brought out his signature celebration in the advert
(

Three goals against Luxembourg made him saw him bag a record 10 hat-trick for Portugal, the most a player has ever achieved for a senior national team.

Sweden’s Sven Rydell achieved nine from 1923 1932 but Ronaldo has overtaken him by netting his 58th career hat-trick.

The former Real Madrid and Juventus talisman wrote on Instagram: “A hat-trick is always a very special moment for any player.

“Fortunately, I have already made some throughout my career and this one, yesterday in the Algarve, assumes a special importance for being the 10th at the service of the National Team and also for being in front of our public.

“Thanks to my teammates, without them it wouldn’t be possible, but also to the fans for their constant support! We keep going together and focused on our goals!”

During his time with the national team, manager Fernando Santos raised a concern regarding Ronaldo’s fitness after he started on the bench during the Red Devils’ draw with Everton 12 days ago.

Santos explained head of last Saturday’s qualifying match against Qatar: “He will go to the game because he needs playing time.

“It’s important to him at this stage [to maintain his fitness by playing regular games.”

He also claimed the United’s and Premier League‘s Player of the Month award for September, his first month back in the English top flight following a 12-year absence.

“Proud to be elected Player Of The Month among so many great players in the Premier League,” Ronaldo again wrote on Instagram.

“Thanks to all my teammates at Man. United, couldn’t have done it without them. Let’s keep working hard and the results will come!”

And best of all, he did all that while practicing kung-fu.