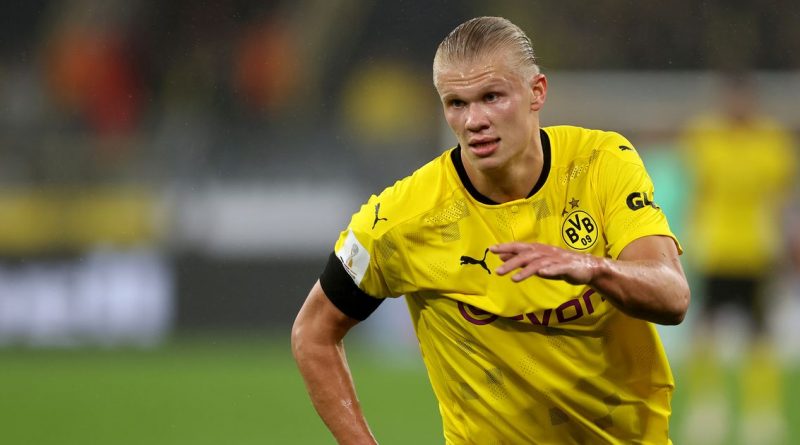 
Despite securing Cristiano Ronaldo this summer, Manchester United are still on the lookout for a centre-forward, and Arsene Wenger may have predicted Erling Haaland’s next location

Manchester United may have just signed Cristiano Ronaldo to lead the line at Old Trafford, but Ole Gunnar Solskjaer is still on the hunt for a long-term centre-forward.

Ronaldo signed on a two-year deal with an option of a further year, but Erling Haaland remains a primary target for United, along with the rest of Europe’s elite.

Haaland will become available for just €75million (£63.9m) next summer as a clause will be activated in the Norwegian’s contract, and the 21-year-old will have a rare luxury of choosing where he wants to play — assuming he wants to leave Borussia Dortmund.

Manchester could be Haaland’s potential destination though, and Arsene Wenger has spoken about the forward’s future.

Erling Haaland is likely to be on the move next summer

Wenger is one of the most respected figures within the game and the 71-year-old is currently FIFA’s chief of global football development after ending his 22 year stint at Arsenal in 2018.

When asked about Haaland, the Frenchman has described the Dortmund striker as a “super talent” and thinks that he is destined to move to the Premier League, as the financial pull of the English top-flight is too strong.

“I think that [Haaland’s move] will happen,” Wenger said, speaking to Bild.

“The economic power of the Premier League is too strong. English football is dominant because it is where the most money is. The best players always go the best way to make the most money.”

The two standout talents of the current generation are Haaland and Kylian Mbappe and Wenger is unsurprisingly extremely fond of his compatriot.

But the Frenchman believes Dortmund frontman Haaland is up there with the PSG star, showing the 21-year-old with praise.

Will Erling Haaland move to the Premier League? Let us know in the Comments below

“Haaland is likely to be the next high-profile goalscorer after Mbappe,” he added.

“He’s a super talent. His ambition, his will to score goals and the ability to fight in a duel [set him apart].

“He’s there and wants to win – there is something in him that is great for a striker.”

If Haaland is to move to the Premier League, it’s likely that only last season’s top four will be able to facilitate housing the Norwegian.

Chelsea’s £97.5m capture of Romelu Lukaku potentially rules them out of the equation, leaving both Manchester sides and Liverpool as potential destinations.

But Anfield is also unlikely to become Haaland’s new home due to the club’s defined wage structure, while both City and United are renowned for offering lucrative contracts to their stars.

Haaland’s father, Alf-Inge, used to play for City and that family connection could hold the key if they make a concrete offer.

But the striker’s playing style suits United much better and would be the ideal replacement for Ronaldo when the Portuguese eventually departs.

Solskjaer is also Norwegian and holds a good relationship with Haaland, giving the Red Devils boss a pivotal role in luring Haaland to Old Trafford ahead of their city rivals.