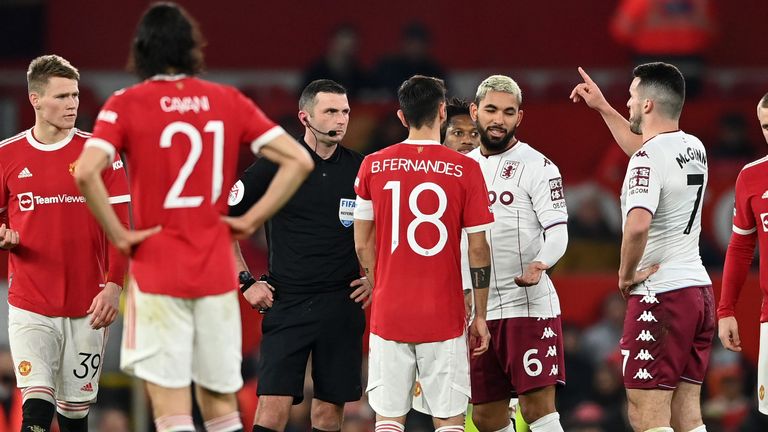 United, who were without the injured Cristiano Ronaldo, took the lead just eight minutes into the game as Fred sent in an inch-perfect cross from the right and McTominay glanced a header past Emiliano Martinez from close range.

Villa were celebrating what they thought was an equaliser just five minutes into the second half when Ezri Konsa headed a free-kick back across the face of goal for Danny Ings to bundle home from close range.

But after a lengthy VAR review, including Michael Oliver checking the monitor, it was disallowed after Jacob Ramsey was adjudged to have blocked Edinson Cavani.

The frustration continued for Villa as Ings again saw celebrations cut short when he raced through and clipped the ball over De Gea for Watkins to tap home, only to see the offside flag go up for the summer signing’s initial run.

It was the story of the game for Steven Gerrard’s side, who despite the early setback, responded well to going behind to McTominay’s early header.

They did everything but score as John McGinn’s long-range effort was kept out by David de Gea before Ollie Watkins rattled the crossbar after turning Victor Lindelof inside as the hosts got in at the break with their lead intact.

After the disallowed goals, Villa continued to push for a late equaliser, but it did not prove to be their night as United survived an almighty scare to reach the fourth round, where they will play Middlesbrough.

Manchester United’s reward for their 1-0 vicotry over Aston villa is a fourth-round tie against Championship side Middlesbrough at Old Trafford.

The fourth-round matches will be played on the opening weekend of February.

How the drama unfolded as Danny Ings’ equaliser was ruled out…

United’s defensive failings finally come back to haunt them! McGinn’s deep free-kick from the right is nodded back across goal by an unmarked Konsa. It’s then turned in by Ings, almost on the line – but will VAR have anything to say about it?

52: VAR! This has gone to a full VAR review… Is Ings in an offside position?

53: There might be a touch from Watkins before it reaches Ings. If so, he’s definitely offside.

53: Darren England, the VAR, is still looking at this. Michael Oliver is as confused as all of us.

54: It sounds as though it’s Ramsey, standing offside before blocking Cavani as the free-kick comes in, who might be in trouble here.

54: GOAL DISALLOWED! Ramsey is penalised for the block on Cavani, as he’s seen to influence the game from an offside position.

“It was job done for Manchester United, but only just!

“Steven Gerrard will be left scratching his head on the bus home from Old Trafford, wondering how his side didn’t get something from this entertaining FA Cup tie.

“Villa were by far the better side as they passed their way through Manchester United time and time again, just as Wolves did in their win at Old Trafford in the Premier League a week ago as Ralf Rangnick’s side’s failings of the last few weeks appeared again.

Man of the match: Matty Cash

“McTominay and Fred may have combined for what proved to be United’s winning goal in the opening stages, but time after time United were overrun in the middle of the park as Villa piled the pressure on the hosts.

“The frustrations of the home fans were evident as passes went astray and Villa continued to dominate the game, and on a different day, Gerrard’s men would have got their reward.

“However, it was to be United’s day as they held on for a much-needed win to ease the pressure slightly on Rangnick.”

Cristiano Ronaldo was conspicuous by his absence as Manchester United again lined up without captain Harry Maguire.

The 36-year-old Ronaldo was not in the squad at Old Trafford, where Ralf Rangnick made five alterations as Diogo Dalot, Victor Lindelof, Fred, Bruno Fernandes and Marcus Rashford came in.

Will Coutinho prove the difference for Villa?

Despite the defeat at Old Trafford, it’s been a big week for Villa with Philippe Coutinho putting the finishing touches to his loan move from Barcelona.

The former Liverpool forward has completed his medical and is currently in France completing paperwork for his work permit.

He is set to join up with his new team-mates on Wednesday to take part in his first training session and will be ready to play in Saturday’s Premier League match against United.

Gerrard will be hoping his former Liverpool team-mate can make the difference when his side goes head to head with United again, this time at Villa Park and live on Sky Sports.