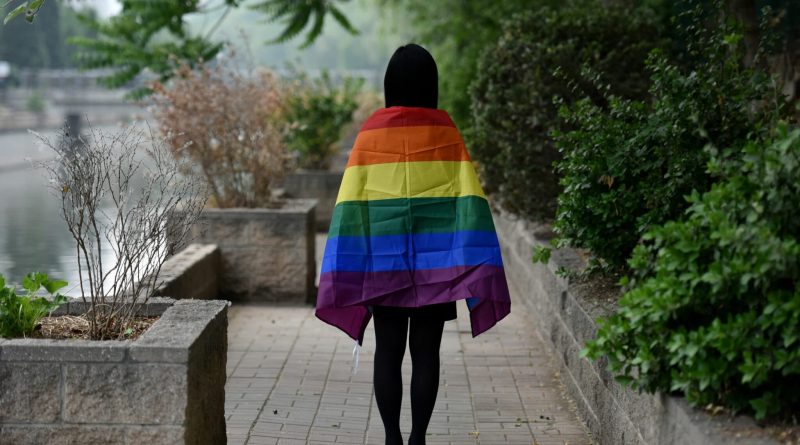 A gay student poses with a rainbow flag in Beijing. (Greg Baker/Getty)

A major LGBT+ advocacy group in China that was fighting legal battles for the queer community has mysteriously been shut down amid fears of a government crackdown.

Although LGBT Rights Advocacy China was one of many LGBT+ groups in the country, in was rare in that it worked to change law and policy through supporting legal action.

It’s co-founder Peng Yanzi famously went undercover in 2014 to expose a conversion therapy clinic, and later won his lawsuit against them. The group has also supported LGBT+ people in custody and discrimination cases, and had been pushing for the recognition of same-sex marriage in China.

But, according to AP News, on Thursday (4 November), the group announcing that it would be ending its work, and shutting down all of its social media profiles.

In a post on WeChat, it said: “We are deeply regretful to tell everyone, Queer Advocacy Online will stop all of our work indefinitely.”

Although no explanation has been given for the shutdown of LGBT Rights Advocacy China, an LGBT+ activist who spoke anonymously for their own safety, said the group had been in “trouble” for months.

On Friday (5 November), China’s ministry of civil affairs said it had “dealt with” 3,300 illegal social organisations and 200 illegal websites, according to state media. It is unclear whether this is linked to the advocacy group’s closure.

China’s government has been cracking down on LGBT+ content

Homosexuality was decriminalised in China in 1997, but LGBT+ people in the country lack many rights – the country still does not recognise same-sex marriage, and there are no legal protections in place that protect LGBT+ Chinese people from discrimination. It wasn’t until 2001 that homosexuality was declassified as a mental disorder.

In recent months, there have been growing fears of a government crackdown on the LGBT+ community.

Last year, the country’s longest-running LGBT+ celebration, Shanghai Pride, was cancelled abruptly, having taken place every year for more than a decade.

A source told CNN at the time that the volunteer-led team at Shanghai Pride cancelled the event following pressure from local authorities.

Earlier this year, it was reported that the social media platform WeChat, which has over a billion users, had been “wiping out” LGBT+ accounts.

In July, several LGBT+ groups told Reuters they had been locked out of their WeChat accounts and said they had been “censored without any warning”.

The platform displayed a message saying that the accounts had “violated regulations on the management of accounts offering public information service on the Chinese internet”.

In recent months, the government has banned “sissy” effeminate men from being on TV, insisting broadcasters must only “vigorously promote excellent Chinese traditional culture”, as well as video games featuring same-sex relationships.