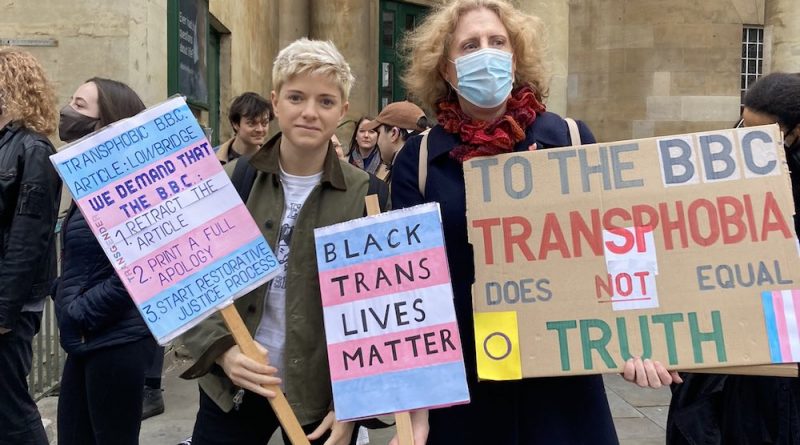 Non-binary comedian and actor Mae Martin joined trans folk and their allies in a protest outside the BBC against its infamous anti-trans article.

Protesters gathered outside Broadcasting House, the headquarters of the BBC in London, on Saturday (6 November).

The action was the second London protest against the BBC story, which claimed trans women were pressuring cisgender lesbians into sex, and also followed protests in Bristol, Cardiff and Manchester.

The broadcaster eventually removed her from the story when she called for the mass “execution” of trans women, and admitted that it knew about the allegations against Cade ahead of publication, but has still refused to remove the article.

The only other country where the BBC published a translated version of the article was Brazil, the deadliest country in the world for trans folk.

Between 80 and 100 trans people and allies demonstrated outside the BBC today.

-Their transphobic propaganda
-Their exclusion of trans people
-The way they have targeted their hate-mongering in Brazil, where more trans people are murdered than anywhere else. pic.twitter.com/mnRzLGRSUr

Martin, who came out as non-binary in April, joined between 80 and 100 protesters outside the BBC headquarters.

Sharing a photo of the demonstration, they wrote on Instagram: “You can’t tell from my grin how unsettled I am by the fact that BBC and other UK media continue to uncritically platform misinformed, demonstrably biased and transphobic opinions.

“It’s bad journalism and it’s contributing to a culture of hysteria that makes life scarier for trans/ non-binary people in this country (and it was already scary).

“Quotes from Lily Cade, who had called for trans women to be lynched and executed, and who multiple women have accused of sexual assault (something the BBC was made aware of and failed to include in the article) display a startling lack of journalistic integrity.”

It was an honour to see Mae Martin protesting too. Protesting against a potential employer takes bravery… https://t.co/OARKuCdAc0

And yeah, that is them. pic.twitter.com/IKqDTAzgyN

An organiser of the protest, who chose to remain anonymous, told news site What The Trans!?: “The BBC’s transphobic article was written, without evidence, to paint a target on the backs of every trans person in the country.

“In doing so it platformed a serial sex abuser who has since called for the murder of all trans people as well as the rape of the mother of a trans person.

“This is not news, it is targeted hate-propaganda that has no place on any news platform. The UK media has hermetically sealed trans people out of the discussion about trans people, this is the real silencing.

“The BBC needs to take this article down and apologise to trans people, it also need to employ trans people as journalists and columnists.”

A further protest outside Broadcasting House has been planned for 8 January, 2022, and Reclaim Pride Brighton is holding another at BBC Sussex on Saturday (13 November).