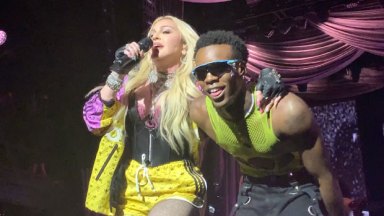 
Madonna‘s son David Banda and daughter Estere are natural born dancers! David, 16, and Estere, 9, showed up in a video posted to Madonna‘s Instagram account on Sunday, June 24, dancing joyfully in the “Vogue” singer‘s bright kitchen. “Cooking in the kitchen,” she captioned the video, alongside emojis of dancers and a black heart. Madonna finished the caption with the hashtags, #davidbanda #estere #sautisol. In the clip, David rocked a long yellow dress, dark socks, and layered necklaces as he moved effortlessly to the song “Melanin” by Sauti Sol, featuring Patoranking.

Estere joined him, wearing double buns, a blue floral summer dress, and loafer shoes, with David even lifting her up in the air and spinning her around at one point. “Hey M-gang, David here,” David said to the camera in part when the dancing began to wind down. “I hope you guys have a great Sunday, love you guys.”

Estere’s twin Stella was also seen in the video, though not dancing, and mom of 6 Madonna, 63, could be seen briefly sitting at the table. The iconic singer’s 18.4M followers took to the comments section to react to the wholesome Sunday scene. Celebrity reactions included a simple row of emoji hearts from Julia Fox, while Debi Mazar commented, “So beautiful,” alongside emoji hearts, as well.

Madonna Then & Now: Photos Of The Music Icon’s Evolution

“Your children are free and fantastic, Madonna,” reacted one follower. “It’s the sign of a great Mom.” “A house so clearly filled with love,” wrote another fan, while yet another observed, “That Is one happy and beautiful family.” Other comments spotlighted David’s remarkable talent as a dancer. “David Banda is such a force,” they wrote. “I don’t even think the world is ready yet for what this beautiful man is going to bring forth.” “David is amazing talent,” wrote another.

Julia Garner: 5 Things About The Actress Who Was Offered The Role Of Madonna In Biopic