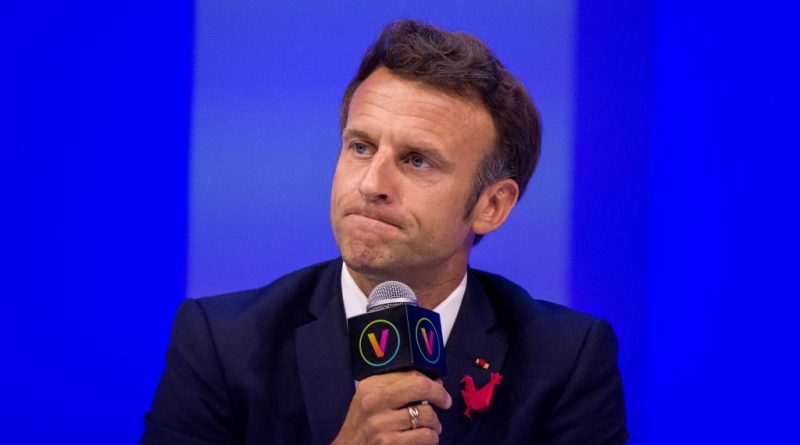 
French President Emmanuel Macron hoped his April reelection would cement his position in power and bolster his agenda. But Macron was dealt a major blow during Sunday’s legislative elections in France.

Macron’s centrist alliance won 245 seats—more than 40 short of the 289-seat threshold needed for a majority in parliament, critically undermining his ability to pass key reforms. Jean-Luc Mélenchon’s leftist alliance, Nupes, scooped up 131 seats, while Marine Le Pen’s far-right National Rally party came in third with 89 seats, a ten-fold increase. The parliamentary make up lies in stark contrast to the prior legislative vote in 2017, where Macron’s alliance won a 350-seat majority. The result marks the first time since the 1980s that a president will govern without a parliamentary majority.

Here, what the vote means for Macron’s agenda:

Although Macron’s alliance is the largest group in parliament, he will struggle to pass his most controversial reforms—including an overhaul of the pension system and raising the retirement age from 62 to 65—without negotiation and compromise. Mélenchon has pledged to lower the retirement age to 60, while Le Pen has promised to maintain the current threshold, and reduce it to 60 for those who started working before the age of 20.

“Macron is not accustomed to, as we say in French, ‘put water in your wine’—making compromises,” says Alice Billon-Galland, a European policy research fellow at Chatham House. “It will take a lot of his time and energy to build consensus bill by bill, and that will tie his hands in terms of what he’ll be able to achieve.”

And with such large opposition groups on opposite sides of the political spectrum, Macron will find himself “between a rock and a hard place,” says Philippe Marliere, professor of French and European politics at University College London. On the one hand, the left will push the president on green energy investment and social inequality, and on the other, the far-right will demand socially conservative reforms. “It’s going to be a very noisy crowd in parliament, particularly on the left with lots of household names, people coming from showbiz, arts trade unionists, anti-racist campaigners, lots of female lawmakers as well,” Marliere says, referring to the new and diverse crowd of lawmakers within the Nupes alliance entering parliament.

Read more: Emmanuel Macron Is on Track to Win Re-Election. What Comes After Could Be Tougher

Macron’s preferred ally will be the traditional right-wing party, the Republicans, which won 61 seats on Sunday. But securing their support for reforms that are unpopular with voters could be difficult, analysts say, as the party seeks to avoid further losses at the ballot box. Record-high inflation and the related cost of living crisis have pushed French citizens further towards politics that embrace economic populism, including those of Nupes and the National Rally.

The election result should not come as a surprise, Billon-Gallard says. “Over the past five years, people felt like their voices weren’t being heard in politics.” This frustration culminated in 2018 with the gilets jaunes (yellow vest) movement. Initially sparked by proposed fuel tax hikes, the demonstrations morphed into a sign of wider frustration at Macron’s pro-business policies and reputation as a “president for the rich.”

However, analysts say the election result could revitalize parliamentary democracy and give voters the sense that their voices are being listened to. “Maybe some of these political battles will be fought not only in the streets with the demonstrations, but actually within the National Assembly,” Billon-Gallard says.

Macron began meeting leaders of the main opposition parties Tuesday at the Élysée presidential palace, including Christian Jacob of the Republicans, Olivier Faure of the Socialist Party, and Le Pen of the National Rally. Further meetings are expected on Wednesday.

A French president bogged down in domestic politics could spell trouble for the E.U. at a crucial time for the bloc, given the war in Ukraine. A month before Russia’s full-scale invasion of Ukraine on Feb. 24, France took over the rotating presidency of the E.U., affording Macron the opportunity to play the bloc’s unofficial leader—particularly after Germany’s longtime chancellor, Angela Merkel, stepped down in December after 16 years in office.

Macron is an ardent Europhile and has maintained close ties with European leaders across the political spectrum since taking office in 2017. He will no doubt seek to cement his status within the bloc. But both Mélenchelon and Le Pen have previously expressed Euroskeptic views, and there are some international issues that will need parliament’s backing, says Marliere.

At the same time, presidents have greater leeway in France over matters of defense and diplomacy. That means Macron won’t have to seek approval from parliament for every piece of legislation, Billon-Gallard says. “If domestic politics become very messy and complicated, Macron could shift his focus to foreign policy because this is where he has a freer hand.”

“In his project, a strong Europe, and a strong France playing a big role in that, is part of his agenda,” Billon-Gallard says. “I don’t think we’ll see him giving up on that.”

What Macron may be forced to admit defeat on, however, is his vision for a revitalized political center in France. When he won the presidency in 2017, Macron promised to make both ends of the political scale redundant. But a two-year pandemic and growing frustration at inequality has turned voters off Macron’s centrist vision.

The future of Macron’s Renaissance Party, previously known as En Marche!, is also uncertain in a post-Macron era.

And the sharp rise in support for Le Pen’s party will give her the political clout to lobby for hardline measures, including a total ban on the headscarf that is worn by a minority of Muslim women in France. The issue animates her traditional base.

Marliere says that while Macron has championed centrism he should be held responsible for voters’ shift to the right, too. During his previous five-year term, Macron supported tough measures to control immigration and pursued legislation that rights groups criticized as discriminatory. “If you ape the far-right on its traditional issues—law and order, immigration—you legitimize the far-right,” she says.