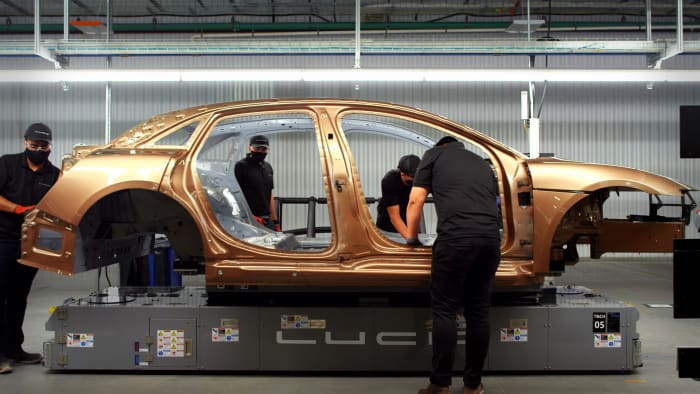 
Tesla (TSLA) – Get Tesla Inc Report has a market cap that tops $1 trillion. That’s a rich valuation for a company that has a rough production rate of 1 million vehicles a year.

General Motors (GM) – Get General Motors Company Report, which produced 6.83 million cars in 2020, down from a peak of 10 million in 2016, according to Statista, has a market cap of nearly $89 billion.

Toyota (TM) – Get Toyota Motor Corp. Report, which has a $342 billion market cap and gets some valuation premium due to its major presence in hybrid vehicles, sold 8.6 million vehicles in 2020, a roughly 10% drop from the previous year. Ford  (F) – Get Ford Motor Company Report, which has a market cap of $100 billion, sold just under 4.2 million vehicles in 2020, down from over 5 million the previous year.

Lucid (LCID) – Get Lucid Group, Inc. Report, a would-be Tesla competitor, has a market cap of nearly $70 billion and essentially no sales.

That data shows that electric vehicles bring a valuation premium that’s substantial. It also shows that Lucid gets an awful lot of benefit of the doubt from investors. It may not need to reach the millions of vehicles sold by traditional automakers to justify its current valuation, but it’s currently trading at a much higher premium per car it has actually sold than Tesla.

Where Does Lucid Motors Stand Now?

Lucid has achieved its valuation without recognizing any revenue from selling vehicles. It did begin delivering vehicles in October, but the numbers were in the dozens, or maybe even the hundreds, but were still essentially zero.

“In our Q3 results you’ll see costs associated with our startup production in September. However, you will not see vehicle revenues until Q4, given that customer deliveries began on October 30th. In Q3, Lucid recognized revenue of $232,000, predominantly related to the use of our battery packs in the Formula E race series,” CFO Sherry House explained in the company’s third-quarter earnings call.

Lucid does have plans to ramp up its production, and CEO Peter Rawlinson seemed excited about the interest in the company’s first vehicle, Lucid Air.

“Now, the fantastic experience these customers and the media’s had with the Lucid Air to-date, have only increased interest in the brand, and the result is an accelerated pace of new reservations, currently at 17,000 and climbing quickly,” he said.

It’s worth noting that Lucid requires a $3,000 deposit to reserve a Lucid Air. That’s a much bigger commitment than the $100 Tesla asks for when people reserve a Cybertruck.

Where Does Lucid Hope to Go?

If everything goes well for Lucid, it expects to produce half as many vehicles as Tesla did over the past 12 months roughly eight years from now. Rawlinson laid out the company’s production roadmap during the call.

Right now, we’re laser-focused as a Company and the whole management team under my direction, in scaling what we’ve got. Laser focused on growing the scale towards 20,000 units next year and 50,000. But we’re planning on 500,000 units by the end of the decade. We have a plan in place to expand Casa Grande to that level. And we’ve also got localization of manufacturing. We’ve got incredible high value in our manufacturing as well because we manufacture the entire technology suite, the battery, the motor, the inverter, the whole electric powertrain, in-house. So we’re not just buying in parts here and just having value that way. There’s a whole lot of in-built value-add to the cars that we’ve got. We’ve got a Casa Grande capacity planned out to 365,000 units.

The “end of the decade,” to be clear, means 2030. That means that Lucid Investors have a long wait ahead until there can be a connection between vehicle production and valuation. And, of course, 17,000 reservations shows that demand needs to grow quite a bit to get anywhere close to actually selling a half a million vehicles in 2030.