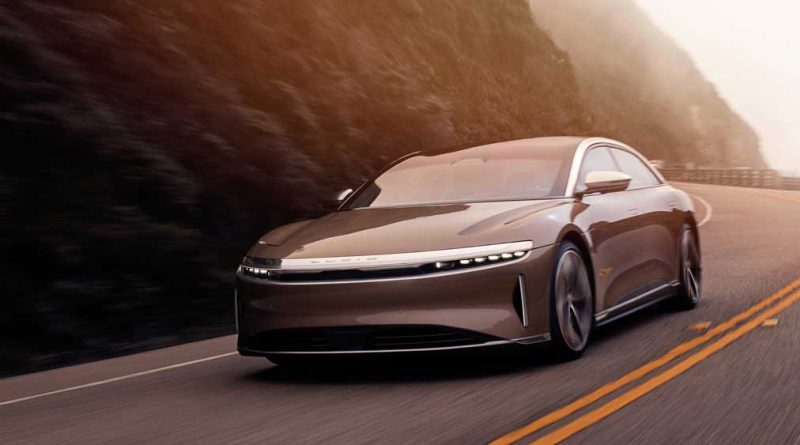 In February, Churchill Capital IV — a special-purpose acquisition company (SPAC) — announced a deal to take Lucid Motors public, valuing the company at $24 billion. The company is going public “to accelerate into the next phase of our growth,” Lucid Motors CEO Peter Rawlinson said.

Lucid Motors stock began trading on July 26 under the ticker symbol LCID on the Nasdaq.

Lucid Motors started delivering its Lucid Air — a high-performance, ultraefficient luxury EV sedan — in late Oct. 2021, according to the company. The company expects to roll out its Gravity performance luxury SUV in 2023. The Lucid Air started in production in late September.

In a slide deck filed with the U.S. Securities and Exchange Commission July 13, Lucid Motors touted more than 10,000 reservations for the Lucid Air, representing $900 million in anticipated sales. It claimed the Air beats the Tesla Model S and Amazon-backed EV startup Rivian’s R1T in battery efficiency, which it calls the ultimate measure of EV technology. It also claims the Air beats luxury EVs from Jaguar, Porsche and Audi on that metric.

Lucid touts EV technology it developed in-house. It describes the Lucid Air as the “quickest, longest-range, fastest-charging electric car in the world,” delivering 500 miles of range. The Environmental Protection Agency hasn’t certified that range yet. The Air also boasts high-end features such as a “glass cockpit.” The Lucid Air features an autonomous driving system using 32 sensors, including long-distance Lidar, a safety technology that Tesla long avoided.

The first fully loaded Air will cost around $160,000, including federal subsidies. Cheaper versions will be released, with a $70,000 version expected in 2022, according to the Wall Street Journal.

On July 23, Lucid Motors shareholders voted to approve the merger of the blank check company.

In mid-July, the company said it had finished its preproduction phase after a series of delays. “The testing and validation of Lucid Air is progressing well,” CEO Peter Rawlinson said on the call, according to Bloomberg. “It’s on track for the second half of 2021 start of production for customer deliveries.”

On Sept. 1, the lock-up period for PIPE (private investment in public equity) investors expired, allowing them to sell shares. The stock plunged nearly 11% in response.

On Sept. 16, the company said its Lucid Air sedan received an EPA Rating of 520 miles of range. The Lucid Air beats the Tesla Model S Long Range by more than 100 miles.

On Sept. 29, the company’s first luxury Lucid Air sedans rolled off the assembly line in Arizona. Lucid expects reservation holders of Lucid Air Dream Edition models will begin receiving their vehicles in late October. The company said it has received more than 13,000 reservations for Lucid Air and increased the planned total production quantity of the Dream Edition to 520 vehicles.

On Oct. 21, CEO Peter Rawlinson says it will launch Lucid Air electric sedans in the Middle East and Europe next year, while launching in China in 2023, according to Reuters.

On Dec. 6, the company said the Securities and Exchange Commission has requested documents related to a probe of its blank-check deal with Churchill Capital.

On Dec. 9, the company announced its intent to offer $1.75 billion in convertible senior notes and Lucid shares dived over 18% in response.

On Nov. 15, Lucid Motors said customer reservations grew from 10,000 to 13,000 in the third quarter, while the company ended the period with about $4.8 billion in cash. Shares surged over 24% in response.

“We see significant demand for the award-winning Lucid Air, with accelerating reservations as we ramp production at our factory in Arizona. We remain confident in our ability to achieve 20,000 units in 2022,” CEO Peter Rawlinson said.

Lucid stock skidded over 6% Monday, trading around 37.55. Shares are trying to find support around their key 50-day moving average.

Lucid Motors stock is a promising long-term EV stock that started deliveries of its first electric vehicle in late Oct. 2021. Shares of Lucid Motors are above a proper buy point, but are already extended past the buy area, so the stock is no longer a buy right now. Keep in mind the company doesn’t have any earnings, so it is more speculative. Wait for a new base to offer a new buy point with the stock so far extended from the previous entry before buying shares.

These Are The Best EV Stocks To Buy And Watch