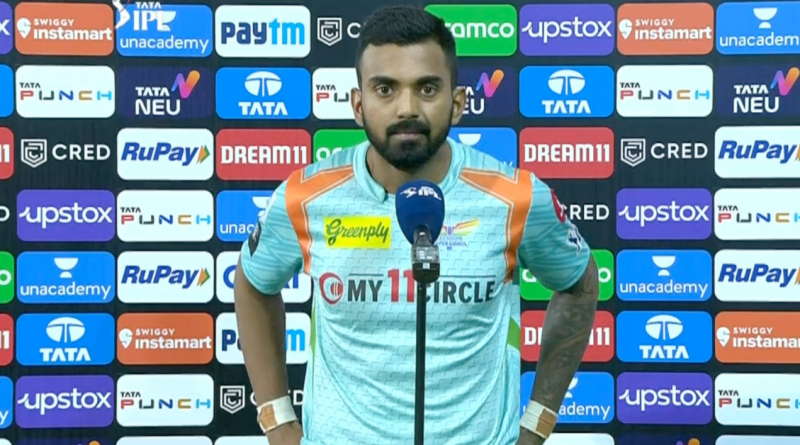 
KL Rahul’s Lucknow Super Giants (LSG) lost by 24 runs against Sanju Samson’s Rajasthan Royals (RR) in the 63rd match of the Indian Premier League (IPL) 2022 at the Brabourne Stadium in Mumbai on Sunday, May 15.

Chasing the target, KL Rahul and Quinton de Kock failed to provide Lucknow Super Giants with a good start. Deepak Hooda, Krunal Pandya and Marcus Stoinis fought hard but it was not enough for LSG to bag a victory and for the first time LSG lost back to back matches in the Indian Premier League (IPL) 2022.

We backed ourselves but we couldn’t execute – KL Rahul

Speaking after the match, KL Rahul said that the target set by Rajasthan Royals was achievable but they were unable to chase it. He said:

“I thought it was a gettable target. Good pitch, obviously something there with the new ball. We bowled well to restrict them to that total. We backed ourselves but we couldn’t execute.”

KL Rahul expressed disappointment at the batting performance of the team and said that they will have to make improvements in the batting department. He asserted:

“Once again the batting group hasn’t been able to perform collectively. We need to go back and work on it. Pune was a lot more harder and lot more in the pitch there than this one.”

KL Rahul further added that the poor batting display in the powerplay has resulted in LSG losing a few games in the tournament. He stated:

“When you lose wickets early it puts pressure on you. We have lost three-four games in the powerplay as a batting unit. Make sure you find a way to stay in there when you play quality bowlers and give a good start.”

KL Rahul also said that they have got a good batting unit and they will not do anything different as it’s just about playing smart cricket against good bowlers. He said:

“I don’t think we are going to do anything different. Just about going out there and executing. Obviously in pressure, you want to do one thing but you end up doing something else.”

“If we can hold our nerves and give ourselves a chance to play the new ball or a good spell. If you get through that spell you always have enough time to make up. We’ve got power in our batting line, so it is just about playing smart when the bowlers are bowling a good spell.”

Also Read: LSG vs RR Watch – James Neesham Gets Run Out Courtesy Of A Mix Up With Ravichandran Ashwin