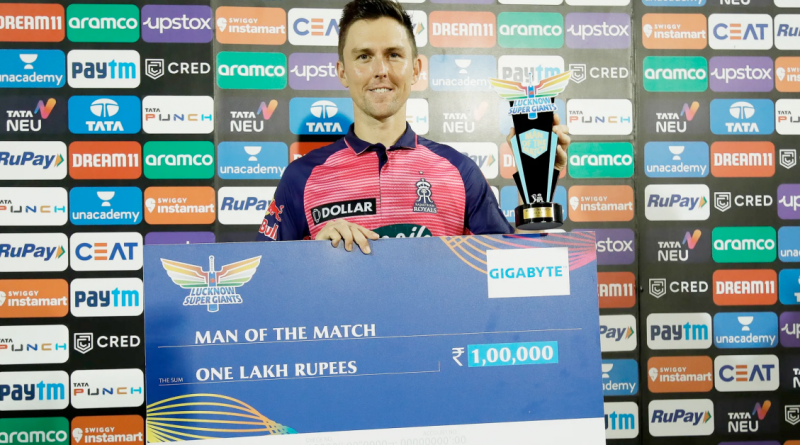 
Trent Boult nor his fans would have ever imagined that he would contribute with the bat for his team in IPL 2022 in a win.

But that’s exactly what Boult did against Lucknow Super Giants on Sunday at the Brabourne Stadium in Mumbai.

I Have Got A Simple Plan With The Ball: Trent Boult

He came into bat in the 19th over of the first innings after Rajasthan Royals had won the toss and elected to bat first.

His team was going great guns at one point in their innings as Devdutt Padikkal and Riyan Parag were looking to add quick runs in the slog overs, but some brilliant bowling and fielding by LSG in the end overs put a stop to the great momentum RR had in the middle overs.

From being 90-2 in 10 overs they were just 153 at the end of 18 overs. They had also lost 6 wickets by then. At one point it seemed they would score more than 180 but the cluster of wickets in the middle meant they could have ended with a below-par total. But Trent Boult scored 17 off 9 balls which included two boundaries and helped RR post 178 in their first innings. The score proved to be about par in the end.

In bowling, Boult did what he does best as he picked up two wickets in the same over as he dismissed Quinton de Kock and Ayush Badoni in the third over to push LSG on the back foot straight away.

He finished the game with the figures of 18-2 from his 4 overs.

At the end of the match, he said, “Some days are better than others. Nice to get wickets at the top. I have got a simple game with the ball. Good catch from Neesham. The boys did talk about some intensity as this was a crucial game for us.” I am surprised that I am talking about my batting in a press conference. We can bring our right attitude and chase a ball. I think this is a tough place to bowl. I am enjoying myself here at a new franchise. A great opportunity”, he further said.

RR would hope that Boult can continue the same form with the ball going forward.