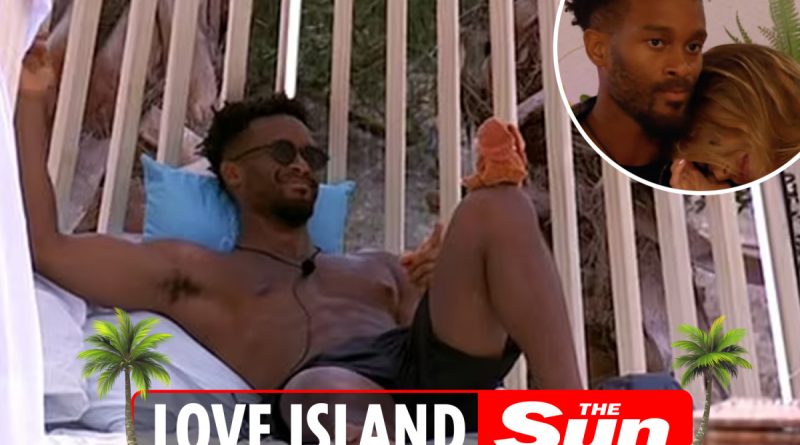 LOVE Island fans were left “heartbroken” for Teddy after he was caught talking to Faye’s stuffed toy at Casa Amor just hours before she dumped him.

The 26-year-old senior financial consultant was left devastated when he returned to the main villa alone only to discover that Faye had ditched him for new boy Sam.

He’d been excitedly clutching her Lady and the Tramp teddy bear upon his arrival, and sadly put it on the floor for her to collect following the rejection.

And in last night’s Unseen Bits, viewers found it all too much when they saw Teddy chatting to the stuffed animal as he pined for Faye.

Those watching at home were devastated by the scene, with one tweeting: “OMG YOU CANT SHOW ME THAT CLIP OF TEDDY TALKING TO FAYES CUDDLY DOG BY HIMSELF AND NOT EXPECT ME TO BE UPSET BECAUSE TEDDY’S A KING AND FAYE CANT SEE IT.”

Another added: “Not Teddy talking with the teddy, I’m going to cry.”

A third echoed: “TEDDY SPEAKING TO FAYES TEDDY WHILE AT CASA AMOR IS SO SWEET, Teddy is a GENTLEMAN.”

Fans have been left outraged by the latest twist in the couple’s relationship, with Faye seeing red and choosing to re-couple with Sam after being shown a misleading photo from producers.

Teddy had kissed another girl at Casa Amor as part of a dare, but had otherwise remained completely loyal and even slept outside for three nights.

Fans were fuming that the postcard from the boys’ villa included a photo of Teddy’s innocent smooch, and accused show bosses of trying to “fix” the series by splitting Faye and Teddy up.

Friday night’s episode ended with the hunk comforting 26-year-old Faye as she broke down in tears having realised her mistake.