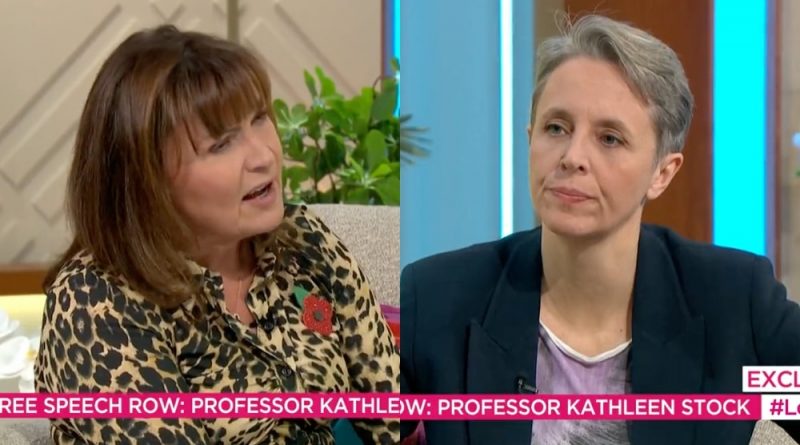 In her most critically acclaimed role yet, Lorraine Kelly has absolutely shut down academic Kathleen Stock over their clashing support for trans rights.

Stock, 49, stepped down from her post at the University of Sussex last month after weeks of peaceful, student-led protests against her employment for her trans-exclusionary views.

The philosopher, who has rallied against her views being “silenced“, has since spoken to a raft of press outlets and programmers about the row – including a slot on Lorraine.

On the ITV programme, Stock insisted she is not transphobic despite her belief that inviting trans men and women into changing rooms makes them unisex.

Lorraine sought to stress that as much as she “disagrees” with Stock, “debate” around trans rights should not be “shut down”.

While top human rights activists may disagree with this, Kelly was nevertheless emphatic in her support for trans people.

“You say your view, I disagree with you,” Kelly, 61, said, “because I do happen to believe that trans women are women and trans men are men.”

‘I don’t agree with everything that you’re saying at all, but that’s okay because we can talk about it’@reallorraine speaks exclusively to Professor Kathleen Stock who left her position at Sussex University after she was accused of transphobia.

“There’s this whole thing around ‘cancel culture’,” Lorraine Kelly continued, “but you’ve not really been cancelled, because you walked away from your job. You did resign.”

“Yep,” Stock responded, not quite making eye contact with the host.

The Drag Race UK guest star then rounded up how Stock has appeared on multiple programmes since reportedly being “cancelled”: “Again with the ‘cancel’ thing, you’ve talked to me, you’ve been on [BBC’s] Women’s Hour, your book’s been reprinted.

“You actually, in a way, have more of a voice now than you did before?”

“And I’m going to use it,” Stock insisted.

“I know by us having this discussion it will actually offend an awful lot of people,” Kelly added. She wasn’t wrong, with anti-trans Twitter accounts quickly targeting the broadcast presenter online.

But Kelly instead doubled down on her support for trans people, tweeting: “I believe trans women are women and trans men are men. Dr Stock doesn’t, and we disagree on that.”

I believe transwomen are women and transmen are men. Dr Stock doesn’t and we disagree on that. https://t.co/sJBtrL67jr

Countless users united to become a joint Lorraine Kelly stan account, as many praised the star for her support while others stressed how Stock was whining about being “silenced” on, well, national television.

“I disagree with you, because I *do* happen to believe that trans women are women, and trans men are men!” – @reallorraine being a vocal trans ally on @lorraine 👏🏻👏🏻👏🏻💕 #lorraine pic.twitter.com/bGUMcx8XMm

What about Stocks free speech!? who’s been in the telegraph, DM, BBC radio and now on ITV. Where are the trans voices? where are the overwhelming pro trans academics that have tried to speak out against Stocks hate? Free speech 4 reactionary bigots only! #Lorraine

“I’m being silenced and cancelled” said the woman on breakfast TV https://t.co/WvcfwNFHUd

Last year, the departing chair of the Equality and Human Rights Commission, David Isaac, slammed the state of trans rights in Britain.

“The toxic nature of debate,” he told The Observer, “is about shutting down freedom of expression and stifling discussion.”

Monitoring groups have, meanwhile, highlighted that the trans community are hounded, dehumanised and demonised by the UK’s mainstream media on an almost regular basis.

But the queen of daytime television and that is Lorraine Kelly has long been an LGBT+ ally. In a 2019 interview with Attitude magazine, she said: “I think what’s going on with trans people just now is kind of what the gay community went through years ago.

“One would like to hope that it will get better, but in the meantime, we’ve got people having a s**t time… just because they want to be the person that they’re supposed to be.

“And God, don’t we all deserve that?”