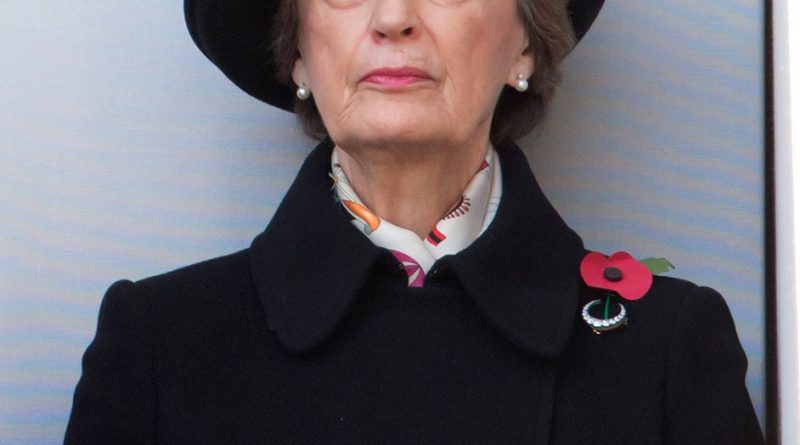 
The British royal family was roiled by another accusation of racism Wednesday.

Lady Susan Hussey, 83, longtime confidante of Queen Elizabeth II and godmother of the Prince of Wales, Prince William, has resigned from her Buckingham Palace duties after a Black charity leader revealed a racist exchange that took place at a reception hosted by the Queen consort, Camilla, on Tuesday at the palace.

Ngozi Fulani, the CEO of Sistah Space—a London-based organization that helps women of African and Caribbean heritage who have experienced abuse—tweeted a paraphrased transcript of the conversation that has racked up more than 34,000 likes and 12,000 retweets since it was tweeted early in the morning on Nov. 30.

Fulani said Hussey touched her hair uninvited and repeatedly asked where she was from, even though she was born and raised in England.

Fulani says Hussey asked “What part of Africa are YOU from?” When Fulani said her family doesn’t have those kinds of records, Hussey pressed on. A sampling from that exchange, as Fulani relayed it on Twitter:

Fulani told the Independent that she was initially hesitant to speak out about the encounter. As she put it, “I found myself in this place where I wanted to say something but what happened would automatically be seen as my fault, it would bring Sistah Space down. It would be ‘oh, she has a chip on their shoulder.’”

A Kensington Palace spokesperson for the Prince of Wales told Sky News that Hussey’s comments were “really disappointing” and “unacceptable,” stating, “it is right that the individual has stepped aside with immediate effect.” Hussey served as Queen Elizabeth II’s lady-in-waiting for over 60 years, and was appointed “Lady of the Household,” an honorary role, by King Charles.

A Buckingham Palace spokesperson told CNN, “We have reached out to Ngozi Fulani on this matter, and are inviting her to discuss all elements of her experience in person if she wishes,” and on behalf of Hussey, stated, “the individual concerned would like to express her profound apologies for the hurt caused and has stepped aside from her honorary role with immediate effect.”

The incident took place at an event in which the Queen Consort condemned the “global pandemic of violence against women” in a speech to about 300 attendees.

It also happened the same day that Neil Basu, ex-British counter-terrorism chief who used to oversee royal protection, detailed the “disgusting and very real” threats that Prince Harry and Meghan Markle received because of their interracial marriage. In an interview with Britain’s Channel 4 news, Basu said he had teams regularly investigating threats to her life from far-right extremists.

Markle has received such harassment and social media bullying ever since she began dating Prince Harry in 2016. The couple opened up about racism within the royal family in their March 2021 bombshell interview with media mogul Oprah Winfrey. Markle, who identifies as biracial, revealed that an unnamed member of the royal family expressed concern about how dark their first son Archie’s skin color would be. In a statement, the palace called the issues raised in the interview “concerning” and said it was taking them “very seriously” and that the family will address them “privately.”

In interviews following the Nov. 29 incident, Fulani hoped that there would be anti-racism training for people with royal duties and that the palace would not miss the opportunity for a teachable moment. As she put it to the British news site LBC, “I’d be happy to have a conversation with anybody to bring about a positive solution” and to ensure “this kind of thing does not happen again.”