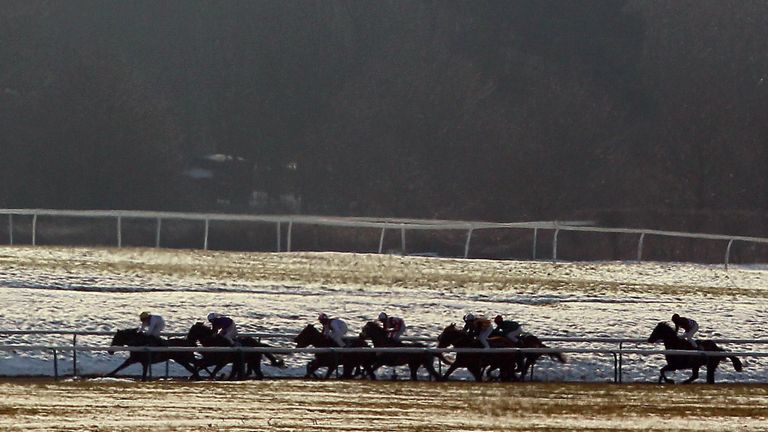 
Ascot is battling through “challenging” conditions in an attempt to get its Howden Christmas Racing Weekend on, with parts of the track still frozen and under snow.

The two-day fixture, which features the Grade One Long Walk Hurdle on Saturday live on Sky Sports Racing, is in doubt as cold weather continues to impact jumps racing in Britain and Ireland.

In a statement on Twitter on Monday morning, Ascot said: “We are working hard to ensure the Howden Christmas Racing Weekend can go ahead this weekend.

“The recent cold weather and forecast is challenging though and the track is currently frozen in places with a light covering of snow.

“Further updates will be provided throughout the week.”

Officials at Newbury have made an early decision to abandon Wednesday’s meeting, meaning there will be no jumps racing in Britain until Thursday at the earliest.

Quality Irish action at Cork kept the show on the road for National Hunt fans on Sunday, but with Market Rasen and Plumpton’s cards already called off, Monday’s racing programme was confined to the all-weather.

The course at Catterick was reported to be “90 per cent” raceable on Sunday ahead of Tuesday’s meeting, but another night of freezing temperatures led to clerk of the course Fiona Needham left with no option but to draw stumps following an 8am inspection.

She said: “It actually hasn’t been as cold overnight as I thought it was going to be – for a lot of the night it was only about minus 1C.

“But temperatures plummeted early on this morning, it’s currently minus 3C and it’s going down, which to be fair, the forecast said would happen and it’s not due to get above freezing all day today.

“A lot of the course was raceable on Sunday – where there’s good grass cover it’s absolutely fine.

“But there are some bits down the home straight that we can’t avoid and it’s getting worse as it get colder, which is very annoying, but given the forecast, I don’t think anybody is surprised.”

It is a similar story at Newbury, where an inspection had been scheduled to take place at midday – some 48 hours in advance of racing.

But while frost covers were deployed last week in an attempt to protect takes offs and landings and other vulnerable areas, clerk of the course Keith Ottesen made an early call to abandon the card.

He said: “It was quite an easy decision. We have had quite a few days of very cold and sub-zero temperatures.

“On Saturday morning, it was minus 6.35C at 7.39am and although it recovered above freezing for a couple of hours through the day, we have been below zero since 4pm on Saturday.

“There is too much frost in the ground now and in places it is pretty much frozen. It is very much frost-affected, so it is not normal ground for racing any longer.

“Unfortunately, with the prospect of another two nights below zero – we are forecast below minus 4C tonight and tomorrow night into Wednesday – and there is only a very short period of time in the day when we are above zero, that won’t give sufficient recover time now.

“We brought the inspection forward from midday to before declarations close today just to make the situation clear for trainers.”

Newbury had been due to stage a Listed mares’ chase on Wednesday. Asked whether the contest could be saved for their next meeting on New Year’s Eve, Ottesen added: “It is a possibility. We haven’t got into it yet. We’ll see if there is any call for that.

“The problem is, in the depths of winter, the opportunities coming up, we need to preserve what we’ve got. But we will certainly look at that, no doubt about it.”

Looking further ahead the team at Exeter has announced an inspection for noon on Tuesday ahead of its planned Thursday fixture.

There has been no jumps racing in Britain since Cheltenham and Doncaster’s meetings on Friday.