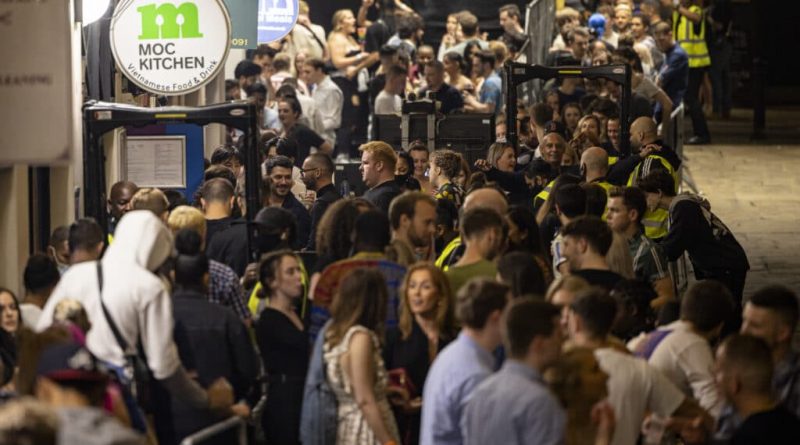 LONDON, ENGLAND – JULY 24: Club-goers queue to get in to Heaven nightclub on July 24, 2021 in London, England. On Monday, July 19th the remaining Coronavirus lockdown measures across England were lifted. Nightclubs and Theatres reopened and general mask-wearing rules have been relaxed. (Photo by Rob Pinney/Getty Images)

London nightclub Heaven was evacuated due to a bomb scare for the second time this year on Friday night (23 July).

As revellers across the country poured into clubs and festivals to celebrate ‘Freedom Weekend’, the famous venue opened for just a few hours before being evacuated around 9.15pm, after a “suspicious item” was reported.

Owner Jeremy Joseph tweeted that he felt “physically sick” at the news of the bomb scare as he waited for police with sniffer dogs to arrive at the venue.

Feel physically sick @HeavenLGBTclub evacuated for 2nd time due to another bomb threat, please stay away from the area waiting for sniffer dogs to arrive

The surrounding area at Villiers Street, Charing Cross was swiftly cordoned off and, after a thorough sweep of the venue, police confirmed that the report was a hoax.

Joseph later praised club-goers for clearing the venue in less than three minutes. The venue re-opened around 11.50pm that same night.

2nd hoax call in 2 months @metpoliceuk police dogs are amazing, I can’t tell you how scary walking around a closed venue with sniffer dogs is, they are amazing
Pleased to say all clear & @HeavenLGBTclub is back open
🙏 to all customers who cleared area in literally 3 mins

The worrying scenes at Heaven stirred unease within the LGBT+ community, flagging memories of a long history of gay clubs being targeted with deadly violence.

I can’t lie, was extremely disheartened when we were evacuated last night.

Heaven’s always felt like a safe space to be yourself, but last night reminded me we’re not all immune from horrible people that don’t like us feeling safe.

In 1999, Soho’s Admiral Duncan was hit by a nail bomb attack, the third in a series of hate crimes committed by self-described racist and homophobe David Copeland.

In 2016, Orlando’s Pulse nightclub became the scene of a homophobic mass shooting which left 50 people, including the 29-year-old attacker Omar Mateen, dead.

Friday was the second time this year that Heaven has been the victim of a bomb scare.

On May 3 this year, the venue was evacuated after a threat forced the stars of RuPaul’s Drag Race UK to flee rehearsals, leaving them “shaken”.

Also this weekend, London’s KU Bar was vandalised with graffiti in what is being interpreted as another targeted attack on the LGBT+ community.

Despite these incidents, last weekend was ultimately a celebratory one for London’s LGBT+ community.

On Saturday (24 July), thousands took to the streets of London in the first “Reclaim Pride” march, which called for inclusion, diversity and acknowledgement of Pride’s radical roots.

The chaos of Friday night didn’t dampen spirits at Heaven on Saturday, either; club-goers queued the entire length of Villiers Street to spend the first weekend without COVID-19 restrictions in the nightclub.

Threats of violence may continue, but as LGBT+ revellers and activists poured onto the streets and into gay clubs to dance, march and scream the weekend away, the overall mood was one of defiance.