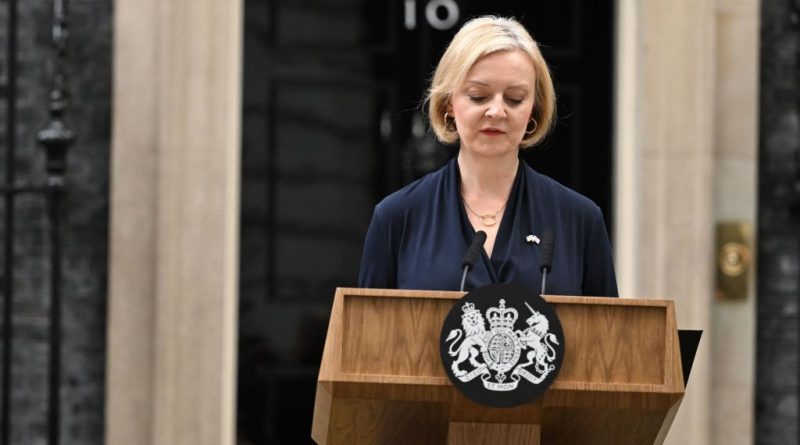 
Dozens of leaders have passed through the doors of 10 Downing Street over the course of British history. But perhaps none have done so more often, or more rapidly, in recent years than Britain’s Conservatives. David Cameron made way for Theresa May who made way for Boris Johnson who reluctantly made way for Liz Truss—each one’s period of survival seemingly shorter than the last. In the end, Liz Truss’s time as Prime Minister lasted just six weeks, a period shorter than the leadership contest that elected her in the first place. Truss is set to become the shortest-serving Prime Minister to date.

“We set out a vision for a low-tax, high-growth economy that would take advantage of the freedoms of Brexit,” Truss said in a brief statement outside Downing Street on Thursday, just 44 days after delivering her first. “I recognize though, given the situation, I cannot deliver the mandate on which I was elected by the Conservative Party. I have therefore spoken to His Majesty the King to notify him that I am resigning as leader of the Conservative Party.”

How did it come to this? The simplest explanation is that Truss, who campaigned on a platform to deliver “growth, growth, growth,” achieved just the opposite. Her signature package of £45 billion ($50.6 billion) in unfunded tax cuts, which disproportionately favored the country’s wealthiest, succeeded only in crashing the pound, spooking the markets, and undermining Britain’s credibility around the world. Rather than assuage the concerns many Britons had over rising inflation and skyrocketing energy bills, Truss’s government simply gave them more to worry about, including rising mortgage rates and an economy in peril.

Read More: Britain’s Conservative Party Can’t Get Its Act Together

In the days leading up to her resignation, Truss conceded that she had made mistakes in going “too far and too fast” with her economic reforms. But perhaps the biggest mistake Truss made was in assuming that growth was Britons’ main priority. Indeed, the prevailing concerns are the cost of living crisis and the economy, followed by climate change, the NHS, and immigration. After six years of instability, precipitated in part by Brexit and made worse by the COVID-19 pandemic and Russia’s invasion of Ukraine, perhaps what the British people really need is a sense of certainty. In Truss’s rise, and in her political downfall, that remains elusive.

If there is any certainty, it’s that Britain’s next Prime Minister—its fifth in six years—will not be subject to a months-long election like last time. Instead, Truss said that the Conservative leadership content will be completed within the next week—a process that seems unlikely to go to grassroots Conservative Party members, as is customary. Instead, the decision will likely be left to Conservative Party lawmakers, who will seek out a unity candidate who can bring the party together after a fractious six weeks and improve its standing in the polls, all the while tending to the litany of challenges that Truss leaves behind.

“The Conservative party is right to restrict this leadership election to MPs,” says Bronwen Maddox, the director of Chatham House. “If the party cannot produce a candidate capable of uniting the party then the road will point next to a general election.”

It’s a tall order, and some past leadership contenders have already ruled themselves out. Among the favorites tipped to replace Truss are her former leadership rival Rishi Sunak, as well as current cabinet ministers Penny Mourdant and Ben Wallace. Others have called for candidates with a bit more experience, including past prime ministers Johnson and May.