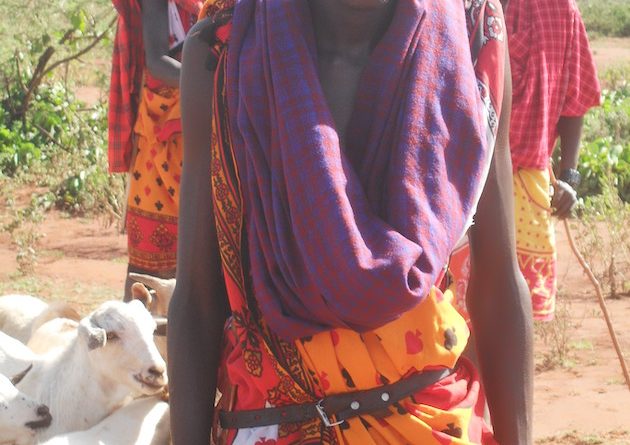 Nairobi, Oct 04 (IPS) – The sight of children begging for water from motorists along the Garissa highway in the northeastern part of Kenya signals that all is not well. Unable to go to school on an empty stomach, drought-affected children wait for good Samaritans along the road, begging for water and food.

Despite very high temperatures, drought-impacted children wait under the scorching sun for left-over food items and drinks from travelers. Animal carcasses and goats on the verge of death from lack of water and pasture can also be seen along the highway. For even in the face of a looming threat to life from a most prolonged dry spell, pastoralists do not consume dying livestock.

The area is sparsely populated, and the highway is far from busy, but the potential danger facing children on the lonely highway pales in comparison to the possibility of starving to death.

Thirteen-year-old Leah Kilonzi paints a dire picture of a severe food and water shortage, “we have nothing to eat when we wake up in the morning or during lunchtime. We have to wait for nighttime to have a small cup of porridge and boiled maize.”

Younger children lie down a few meters from the road, too hungry to cry and hoping silently that the older children will get something.

Garissa is one out of 23 Arid and Semi-Arid Lands (ASAL) counties ravaged by an ongoing severe drought as three years have gone by without a drop of rainfall. Children, pregnant and lactating women are severely affected by the acute food shortage, and diarrhea, acute respiratory infections, and malaria are on the rise across drought-stricken regions.

Government data shows that the ongoing drought situation is the climax of four consecutive below-average rainy seasons in ASAL regions of this East African nation. As a result, an estimated 4.2 million people are in dire need of humanitarian assistance, according to the Kenya Drought Flash Appeal.

“The most recent data from the government shows that from March to June 2022, at least 942,000 children under the age of five years living in ASAL regions were suffering from malnutrition. More than 134,000 pregnant or lactating women were malnourished and requiring immediate treatment,” Kariuki Muriithi, a food security expert in northeastern Kenya, tells IPS.

“Overall, at least 229,000 children were suffering from severe acute malnutrition as of June 2022. The situation has since escalated, and the burden of malnutrition is heavier.”

The National Drought Management Authority drought update for the month of September 2022 confirmed that the drought situation continued to worsen in twenty 20 of the 23 ASAL counties.

Putting into perspective the degree and magnitude of the humanitarian crisis in the ASAL region, counties such as Mandera have reached critically alarming levels of malnutrition. The prevalence of global acute malnutrition in the County is 34.7 percent, more than double the emergency threshold of 15 percent.

An estimated 89 percent of Kenya’s land area is classified as ASAL or drylands and is home to about 26 percent of Kenya’s population, according to the state department for development of the Arid and Semi-Arid Lands. ASAL regions are dominated by pastoral communities, their lives characterized by prolonged dry spells and occasional drought, heightening levels of destitution and impoverishment.

The ongoing drought is the most severe in four decades, prompting the government to declare a national drought emergency.

David Korir, a senior officer in the Ministry of Agriculture and Livestock, says across Kenya’s ASAL regions, the number of people classified as being in an emergency drought situation is at least 785,000, or five percent of all people affected by the drought. At least 2.8 million people, or 18 percent, are classified as being in crisis.

He says nine out of all 23 ASAL counties, including Garissa and Mandera, have over 40 percent of their population classified as being in crisis or worse.

Government projections show that the food security situation is likely to worsen between October and December 2022. As such, at least 3.1 million people are likely to be classified as being in crisis, and another 1.2 million in an emergency.

“Of particular concern is the fact that pastoralists have been pushed to the edge of climate change adaptability. Across ASAL regions, we have about 13 million pastoralists and agro-pastoralists,” he tells IPS.

Pastoralists sustain domestic, regional, and international livestock markets but with more than 1.5 million livestock dead thus far and the cost of surviving livestock declining by up to 40 percent, their livelihoods now hang in the balance.

“Levels of vulnerabilities from prolonged dry spells and droughts are so high that an increasing number of pastoralists can no longer cope with the deepening famine,” he expounds.

Their adaptive capacities are further compromised by perpetual political and socio-economic marginalization.

Faced with rising temperatures, dry wells, and an unyielding sky, Korir speaks of a precarious pastoral economy. He says pastoralists are unable to re-stock animals lost to drought or to explore alternative feeding models such as harvested fodder or commercial feed because natural pasture is no longer an option.

Similarly, they are unable to keep livestock and, particularly, camels, which are more drought resistant because camels are too expensive. A young camel calf that has just been born goes for around $500 to $600, pastoralist Fred Naeku tells IPS.

“Pastoralists have coped with drought by moving from place to place in search of pasture and returning to their home areas when drought situation improves. This is no longer a viable option because the entire horn of Africa is affected, and pastoralists cannot run to neighboring Ethiopia or Somalia for relief,” Korir observes.

“We are increasingly seeing pastoralists with herds of cattle within the City of Nairobi. They are desperate, stranded, and in dire need of a solution and are hopeful that their presence inside one of Africa’s leading cities will provoke their leaders into offering much-needed relief in form of sustainable coping mechanisms.”