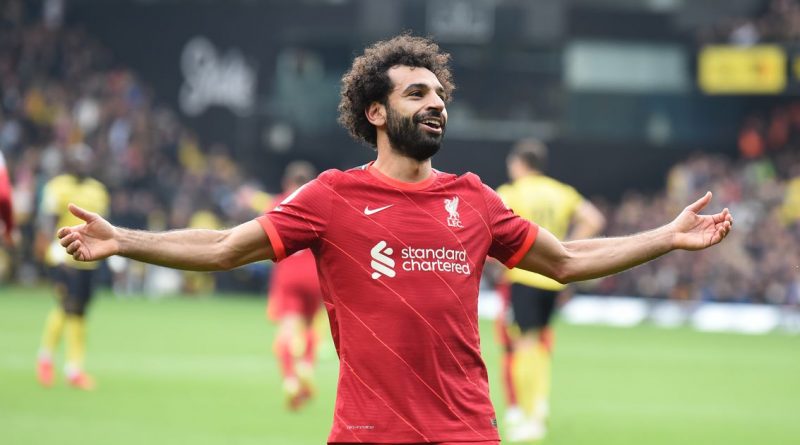 Mohamed Salah is the best player in the world right now.

In the past, a declaration like that would usually become the starting point for a long and tiresome debate in which fans of Lionel Messi and Cristiano Ronaldo pile in with their counter-arguments.

But right now there isn’t – at least there shouldn’t – be much debate about it. Thankfully, for those weary with the seemingly endless GOAT debate, Liverpool’s star player is in the form of his life and no one else is close to his level at the moment.

Jurgen Klopp may not be the most impartial observer on the subject, but he is spot on.

“He is for sure one of the best in the world right now,” Klopp said in his press conference after Liverpool’s 5-0 win over Watford on Saturday.

Mohamed Salah scored another wonderful goal for Liverpool on Saturday
(

“I see him every day and that makes it maybe more easy for me. But there is [Robert] Lewandowski out there and people like that, Ronaldo still scoring like crazy, Messi still pulling out performances to a world-class level.

“And others will come. But in this moment, for sure he is on top of that list.”

You can back up Klopp’s case in many ways. First of all: numbers.

His stunning goal against Watford means Salah has now scored 10 goals in 10 games this season. He also has four assists to go with his goals.

That makes him joint top-scorer in the Premier League, alongside Leicester striker Jamie Vardy.

Salah has failed to score in just one match so far this season. He has been supremely consistent and has had a direct impact on his team: Liverpool are unbeaten in all competitions so far in 2021/22.

Do you agree? Is Mohamed Salah is the best player in the world right now? Have your say in the comments section below.

Lewandowski has 11 goals and one assist in nine games for Bayern Munich.

The Polish goal machine might currently top Salah for sheer quantity, but how about the quality of the Egyptian’s goals?

This is where Salah pulls clear in the race – if you even consider there to be one.

Quite simply, Salah has scored two of the Premier League’s most memorable goals in back-to-back games.

Thanks to the international break, fans have spent the last two weeks reflecting on Salah’s show of genius in scoring a unique and world-class goal in Liverpool’s 2-2 draw with Manchester City.

The way he spins Joao Cancelo. The way he beats Aymeric Laporte. And the way he finds the corner of Ederson’s net. Every facet is ingrained in the memory of Liverpool fans.

Now they can enjoy the replays of a similar work of beauty against Watford. His inventiveness, quick feet, skill level and composure is off the charts in the strike at Vicarage Road, which showed a player brimming with confidence.

Mohamed Salah’s bending was a thing of beauty
(

The way he stays cool despite being surrounded by a crowd of Watford players. The way he wriggles free with the subtlest use of skill.

The way he manipulates the ball. The way he sits down Craig Cathcart. And, finally, the way he caresses his trademark left-footed finish into the bottom corner.

All of that came after he had already played a sumptuous outside-of-the-foot through-ball into Sadio Mane to make it 1-0 in the opening stages.

Salah has long been in the upper echelons of world football. But his recent unprecedented purple patch has really pushed him up into the stratosphere. No one is keeping up.

Let’s go back to Klopp to hammer home the point.

“The consistency he delivers, maybe people just now are starting to see it but it was always there,” he said.

“He has played for us for five seasons now and it is absolutely incredible the way he performs since he was here.

“He has been in the top five in the world since he has been at Liverpool and now he is the best in this moment.

“The big thing with Messi and Ronaldo is nobody had a doubt about it for years. But Mo is at the top level for years as well and there’s still a lot to come from him because of his desire.

“He just wants to perform at a top class level.”

Mohamed Salah is the best player in the world. Debate ended.