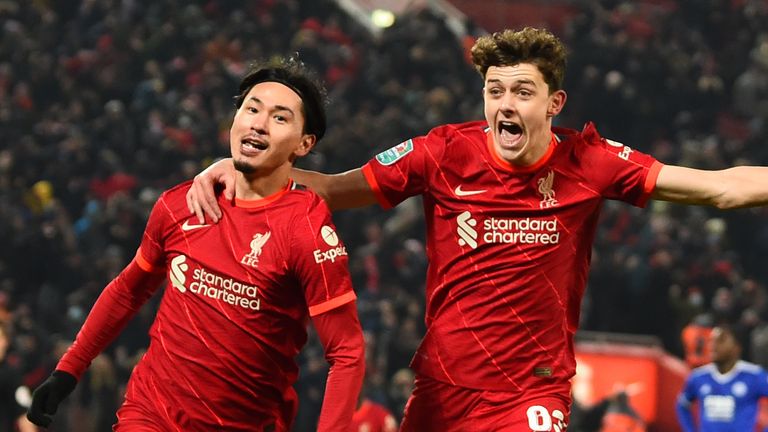 
Liverpool mounted a stunning last-minute comeback before beating Leicester on penalties after a 3-3 draw to reach the semi-finals of the Carabao Cup at Anfield.

The Reds, with 10 changes from the side which drew at Tottenham on Sunday, were cut apart at will before half-time with Jamie Vardy on target twice in four minutes (9, 13) and denied a hat-trick by the width of the post.

Three half-time changes turned the balance of the game in the hosts’ favour with Diogo Jota, James Milner and Ibrahima Konate introduced, and midway through the second period Jota’s smart finish gave the Reds hope from Takumi Minamino’s perfect tee-up.

Another 20 minutes of incessant Liverpool pressure appeared insufficient to keep their cup dream alive – until Minamino pulled them level in the fifth minute of second-half stoppage time to take the tie to penalties.

After six perfect spot-kicks, Luke Thomas’ tame effort was kept out by Caoimhin Kelleher, but with the chance to send the Reds through Minamino blasted the hosts’ fifth penalty against the bar.

After Kelleher again leapt to deny Ryan Bertrand, Jota made no mistake in sudden death, sending Liverpool into the last four to face Arsenal and leaving Leicester to ponder how victory slipped from their grasp.

Despite a young Liverpool side, including Tyler Morton, Neco Williams, Billy Koumetio and Conor Bradley, looking comfortable early on, the hosts found themselves 2-0 down in the blink of an eye with a pair of goals which owed something to youthful naivety.

First, Koumetio left Vardy space on the right of the box to fire in from a narrow angle past Kelleher’s despairing dive, then Bradley was caught up the pitch as Leicester countered down the left, with Thomas’ ball finding Patson Daka, whose cross was buried by the veteran forward.

A breathless opening continued as Oxlade-Chamberlain buried Roberto Firmino’s clever lay-off, but the hopes of a recovery took a dent when Maddison fired a wonderful 25-yard effort into the top of the net which was past Kelleher before he had time to react.

Moments later Vardy could have put the result beyond doubt from a Leicester counter following a poor Joe Gomez pass into midfield, but he struck the base of the far post with Kelleher again beaten.

Jurgen Klopp’s half-time trio of changes had the desired effect from the restart as Liverpool upped the tempo and, Kiernan Dewsbury-Hall’s 20-yard curler aside, were untroubled at the back after the break.

It took 22 minutes for them to find a way back into the match when Minamino turned Wilfred Ndidi and found Jota to fire past Kasper Schmeichel from just inside the area, and though the pressure continued, it appeared any hope of a leveller may be beyond the hosts.

That was until the fifth of six minutes of second-half injury-time – when Ndidi allowed Milner’s ball to bounce over him and reach Minamino, who controlled it well before his composed finish sent the tie to penalties.

Thomas’ poor spot-kick appeared to be the moment which would finally seal the turnaround in Liverpool’s favour when Kelleher dived to deny him, but Minamino then shot against the woodwork from 12 yards to deny himself the plaudits for the second time on the night.

Bertrand gave Liverpool a second chance to seal their progression with another poor penalty and this time Jota took full advantage, burying the ball in the far corner to set up a semi-final date with Arsenal in the new year.

Liverpool will be back in action on Boxing Day when they host Leeds at Anfield; kick-off 12.30pm. Leicester travel to Man City on Sunday; kick-off 3pm.