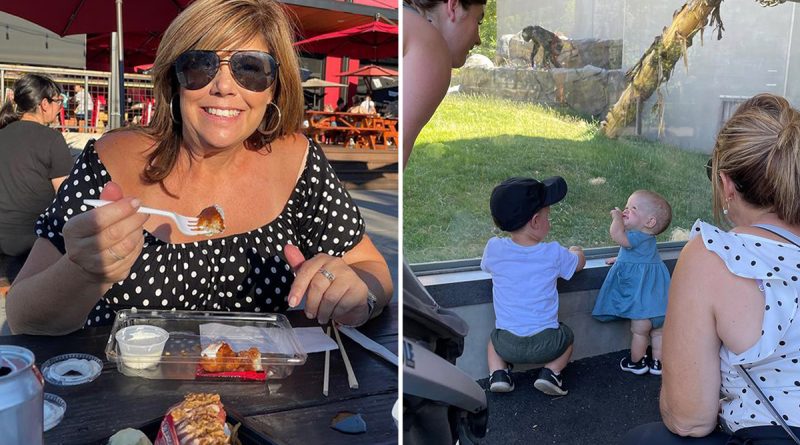 The 53-year-old spent quality time with Matt’s family members after his ex-wife Amy was ripped by fans for “NEVER” babysitting.

Matt, 59, took to Instagram on Sunday to share of photo of Caryn smiling as they enjoyed a meal together, as well as a video and photo of the couple taking his grandkids to the zoo.

He explained in the caption that they spent time with his grandkids, writing: “Wonderful weekend… first on a fun date night with this beautiful woman to the local outdoor hotspot then the Saturday night movies… Sunday all day at the Zoo with these besties.”

During the July 6 episode of the TLC show, fans rushed to Twitter to slam Amy when they noticed that Caryn seems to spend more time with Zach and Tori’s children than the actual grandma does.

Another added: “Caryn watches the kids more then Amy.”

A third chimed in: “Surprising to see Caryn care for the kids better than Amy…”

Amy and Matt have had a strained relationship since their divorce in 2016.

Amy and Matt are also the grandparents to son Jeremy and daughter-in-law Audrey’s kids Bode and Ember.

Audrey and Jeremy are currently expecting their third child together, while Jacob’s wife Isabel is pregnant with their first child.

While Matt has moved on with Caryn, Amy is currently engaged to Chris Marek.

During last week’s episode of the reality show, fans slammed Amy as “controlling” as they watched the engaged couple plan their wedding.

As Amy and Chris sat down to send the invites to their wedding, the couple disagreed over how many people the bride planned to invite.

The pair continued to disagree as Chris insisted they give their guests two wedding favors.

However, Amy argued that the guests should only receive painted rocks that are sentimental to her and Chris.

As the scene was airing viewers took to Twitter to slam Amy for being “controlling” over wedding planning.

One fan wrote: “Amy is still being very controlling when it comes to the wedding planning!!”

A third chimed in: “Amy was a bit selfish there with only her painted rock as a wedding favor. Didn’t even hear his favor idea. Whatever is was, it has to be better than a painted rock…”