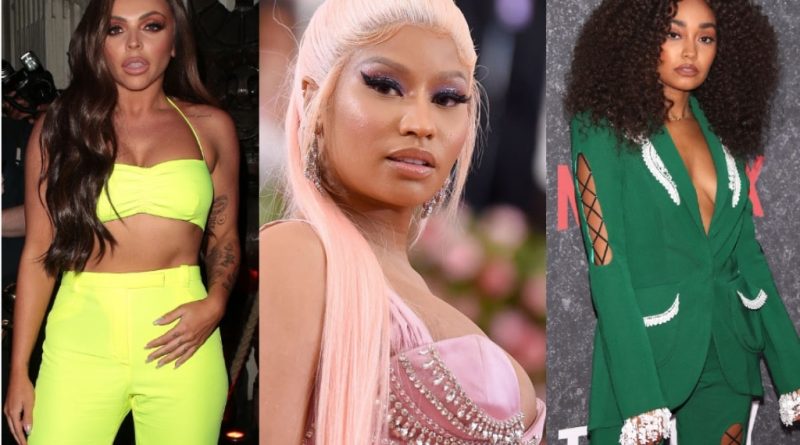 Little Mix fans have rushed to defend Leigh-Anne Pinnock after Nicki Minaj launched a vicious attack on her over “blackfishing” claims.

Jesy Nelson immediately faced allegations of “blackfishing” – the term refers to a white person who appropriates Blackness using make-up, fake tan and lip fillers, as well as by co-opting clothing and hairstyles made popular by Black people.

The row escalated when an influencer claimed that Leigh-Anne Pinnock called her former bandmate out for blackfishing in a private exchange on Instagram.

Influencer NoHun shared screenshots of messages allegedly exchanged with Pinnock, which appear to show the singer calling Nelson a “horrible person” and saying she should be called out publicly for blackfishing. It isn’t clear whether the messages were genuine.

It wasn’t long before Nelson’s “Boyz” collaborator Nicki Minaj weighed into the furore. The pair co-hosted an Instagram Live on Monday (11 October) – and Minaj didn’t hold back.

The rapper hit out at the “clown s**t” discussion and said Nelson’s former bandmates should be supporting her instead of tearing her down.

“Sweetheart, take them text messages and shove it up your f**king ass,” Minaj said.

“Let her enjoy this time. If you was in this woman’s group and you ain’t talk about this s**t for 10 years, and as soon as you see she’s got a video coming out with Nicki Minaj.”

She continued: “Print them text messages out, bust your ass open and shove it up your mother**king ass. OK? And stop trying to hurt people and kill people’s lives and career.”

Nicki Minaj went on to suggest that Pinnock and her Little Mix bandmates are simply jealous of the fact that Nelson now has a solo career.

“Stop. If you want a solo career, baby girl, just say that,” she said.

“You can go out and put your own music. We’re gonna support you and love you. That’s it. You don’t have to attack someone else. If that’s how you felt, why were you kiki’ing with her and being in the videos with her for 10 years?”

She continued: “Now, all of a sudden she’s not in a video with you, you have some negative, evil thing to do and say? Stop.”

Nicki Minaj later elaborated on her views on Twitter. “JeLeigh btchs actin real messy,” the rapper tweeted. “If you know someone has been suicidal from bullying in the past, why try to get a bunch of ppl to bully them again about smthng else, on an even bigger scale? Shame on you – that’s rlly sad. You don’t know what people can deal with. Mental health.”

JeLeigh btchs actin real messy. ~ if you know someone has been suicidal from bullying in the past, why try to get a bunch of ppl to bully them again about smthng else, on an even bigger scale? Shame on you— that’s rlly sad. You don’t know what ppl can deal with. 🙏Mental Health

Little Mix fans rushed to Twitter to defend Pinnock, with many pointing out that the singer is already enormously successful – so she’s hardly likely to be “jealous” of her former bandmate.

One last thing, but it’s actually hilarious Nicki is coming for Leigh, claiming she’s jealous of Jesy because she went solo … when Leigh is already, actually, debuting as an actress and solo singer, on top of being a company owner and song writer. Jealous of what exactly? pic.twitter.com/F2iptLxCZt

Nicki wants so talk about Jesy’s mental health when LM haven’t said a negative thing about Jesy publicly. But she is using her platform to bully and attack a black woman (who has don’t absolutely nothing to her might I add) currently suffering from PPD. Make it make sense pic.twitter.com/wxJsC6cYu6

you’re literally cursing and throwing hate at a black woman who has always admired you and supported your cause because of a white woman who tries to appropriate your culture and still come to talk about mental health? are you serious, nicki? https://t.co/74KsoQkQ4Q

Bullying a black woman on your ig live making it seem like she had been through nothing and calling her jealous and a clown
Like I’m sorry WHO’S JEALOUS ????? #nicki pic.twitter.com/nmHVeejgo9

I thought jesy and nicki are going on live to promote their music but there they two womens went on live just to encourage people to bully leigh.
I just unfollowed jesy and nicki what about you?? pic.twitter.com/58cMLYgAOS

Fans also shared their disappointment in Nelson for failing to stand up for Pinnock.

yet she sat there and laughed as nicki berated her in front of 100,000 people pic.twitter.com/SjRvHEOcFe

Jesy Nelson made an entire documentary about the importance of kindness and online trolling, but happily sat there and laughed as Nicki Minaj ripped Leigh-Anne Pinnock to shreds in front of 100k people on their Instagram live. pic.twitter.com/b24HXS60pH

Jesy Nelson and Nicki Minaj’s Instagram Live came after days of controversy surrounding their new song “Boyz”. Nelson has been roundly criticised for the song, with many fans suggesting she has stolen from Black cultures.

Nelson addressed the blackfishing allegations during her Instagram Live with Minaj.

The singer said she never intended to “offend people of colour” with the music video – instead, she wanted to “celebrate” ’90s R&B because “that era of music is what I love”.

“It actually does really hurt me that may have offended people,” she said.

She also claimed that Leigh-Anne had addressed blackfishing with her previously, but only after they had filmed their “last music video”.