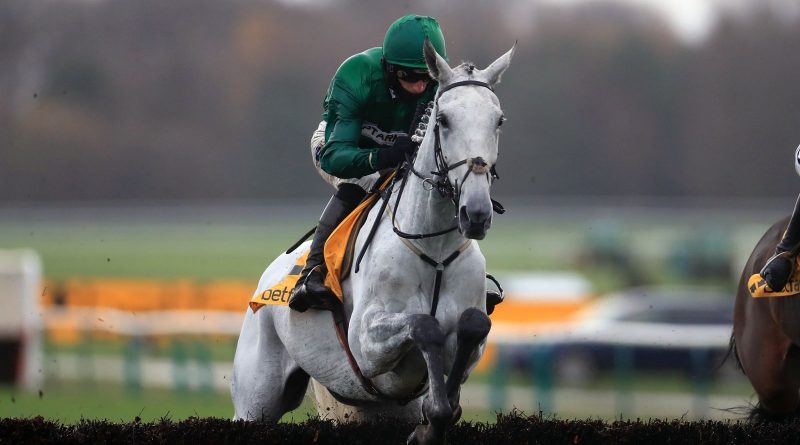 
Anthony Bromley, racing manager to Simon Munir and Isaac Souede, has confirmed that Bristol De Mai will take his place in the £150,000 Fleur De Lys Chase on Sunday at the inaugural Lingfield Winter Million Festival, live on Sky Sports Racing.

The popular grey has not been seen since pulling up in the Betfair Chase at Haydock, a race he has won on three occasions.

But Bromley confirmed that the 11-year-old hasn’t missed any potential engagements and is good to race this weekend, assuming the track at Lingfield gets the go-ahead for the three-day meeting, with over £1m in prize money across the trio of cards.

Anthony Bromley, racing manager to Simon Munir and Isaac Souede, has confirmed that Bristol De Mai is expected to run in the Fleur De Lys Chase at the Lingfield Winter Million Festival this weekend.

“It’s fairly certain he’ll go to Lingfield on Sunday,” Bromley told Sky Sports Racing. “We did put the entry in for the Peter Marsh at Haydock but that was really only a last-minute thing yesterday.

“There was talk of frost covers at Lingfield so I just thought we better have a back-up plan just in case there was something up with the ground at Lingfield getting frozen and being off.

“So he’s 90 per cent likely to run in it – he has got a six-pound penalty in it which is a bit tough. We have to give six pounds to Fanion D’Estruval I saw but we’ll just have to see how it goes.

“I think it’ll be a smallish field so we are heading to Lingfield. We’d appreciate if it was more than three miles rather than two miles and six furlongs but it will take some getting.

“But they are calling it heavy and with the frost it could be really stamina-sapping so hopefully the two-and-a-half milers will find it tough going and him as a three-miler will find it ok.”

Bromley added that jockey Daryl Jacob – who misses the ride this weekend due to injury – was unhappy with the decision not to water the chase track at Haydock on his mount’s seasonal reappearance.

“I can tell you the fallout – Daryl wasn’t very happy that they hadn’t watered the track,” he added. “They had been everywhere else in the country at that time.

“They said it was good to soft but it was more like good to firm on the chase track and he just never operated on the day.

“We knew our fate after a few races at Haydock but we were there and you have to take your chance but Daryl didn’t knock him about.

“This has been his target since November because we thought this would be the ground for him at Lingfield.”

Opponents in this weekend’s Fleur De Lys Chase include Grade One winners Dashel Drasher and Fakir D’oudairies, as well as Master Tommytucker from the Paul Nicholls yard.