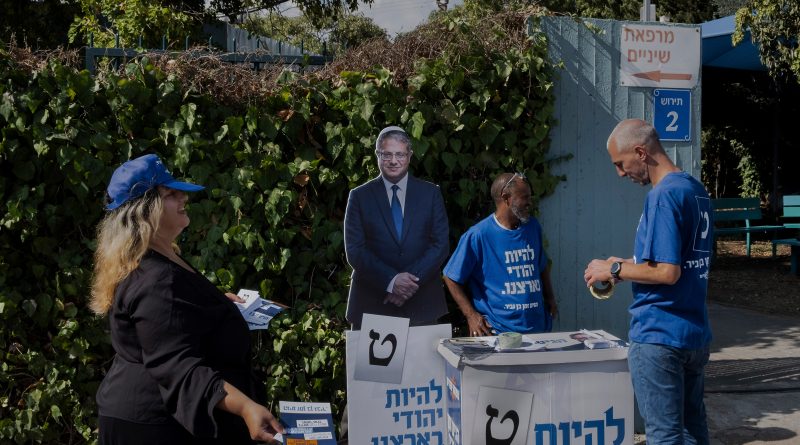 
It took five runs over three and a half years for Benjamin Netanyahu, leader of Israel’s right-wing Likud party, to form the stable coalition that he sought so badly. Since he was indicted in 2019 for bribery, fraud and breach of trust, the country has been in a cycle of elections between two groups–the “Yes, Bibi” (Netanyahu’s nickname) and the “No, Bibi” blocs, with neither able to form a stable government.

But after the last ballots were counted and the results were announced last Thursday, the concern of the “No, Bibi” bloc was no longer that a corrupt politician would again be leading the state. What now worries liberal secular Israelis across the board is that the state of Israel may no longer be democratic.

The “Yes, Bibi” bloc got an absolute majority due to the stunning success of the Religious Zionism slate–a group of three ultra-right-wing parties with various anti-democratic, Arab-hating, homophobic, religious, Jewish supremacist stances. It grew from six seats in the 120-seat Israeli Knesset to 15, to become the third-largest slate in the Knesset and the second-largest in Netanyahu’s bloc. At the same time, voters pushed the Meretz party, Israel’s 30-year-old Zionist left-wing party, out of the Knesset. What had remained of the Israeli left was practically stomped out.

Together with the Likud party and two ultra-Orthodox parties, Netanyahu will soon form the most far-right-wing, ultra-nationalist, religious coalition in Israel’s history. Its 64 seats will have only nine women MPs and possibly two women cabinet ministers. The outgoing government had a total of 30 female MPs and ministers.

Israeli commentators are comparing the country with Sweden, Hungary and Russia. Indeed, Hungary’s Victor Orban was the first to congratulate Netanyahu, while U.S. President Joe Biden did not until Monday.

Hebrew social media has filled with expressions of fear for the future. Many citizens declared interest in leaving the country. Memes mocking the election result have gone viral, one reading: “Don’t forget that tonight, we are moving the clock back 2,000 years.” And according to newspaper Yedioth Ahronoth, Google Trends found that the day after the elections, the most-searched terms included: foreign passport; green card; emigration; relocation; and “leaving the country.”

Volunteers from the Jewish Power party hand out fliers at a polling station in Nof Hagalil, Israel, on Nov. 1.

Netanyahu can now breathe easy; because his bloc has an absolute majority, it can comfortably pass laws. And the Religious Zionism slate–made up of the Jewish Power, National Union and Noam parties–has agreed to abolish the crimes from the criminal code for which Netanyahu is on trial. And it has other plans in store.

The slate has published its intent to legislate a bill that would neuter the High Court and another that would allow politicians to appoint all justices, essentially ending the checks and balances in the judicial system.

“There won’t be a High Court,” political analyst Raviv Drucker said in a TV interview shared widely on social media. “It becomes an advisory body.”

Itamar Ben Gvir, who leads the Jewish Power party, is the star of the slate. A disciple of the Arab-hating Jewish supremacist Meir Kahane, whose “Kach” party was outlawed as a terror organization, Ben Gvir formerly was seen as a fringe element in Israeli politics, a provocateur who visits Palestinian towns to instigate violence among Arabs and Jews. He’s been convicted of incitement to racism and support for a terror organization, and until he began running for Knesset, he displayed in his living room a picture of Baruch Goldstein, the American-Israeli who massacred 29 Palestinians praying at the Cave of the Patriarchs in Hebron in 1994. The Israeli military refused to draft him because he was considered too extremist.

In 2021, Netanyahu legitimized Ben Gvir by convincing him to run with MK Bezalel Smotrich, leader of the National Union party, with the homophobic Noam party, to pass the minimum threshold of 3.25% of all the votes.

Liberals, a minority in Israel, are fearful of Ben Gvir’s proposals which, if passed, would affect Israel’s treatment of Palestinians. He wants citizens who do not pass a “loyalty test” to be deported. (In August, a local radio station’s online poll found that nearly two-thirds of Israelis support the proposal.) Ben Gvir also wants to loosen the security forces’ rules for opening fire and legalize capital punishment against Palestinians. Finally, he proposes giving immunity to Israelis who physically harm or kill Palestinians that were accused of harming Israelis.

In May 2021, Jewish-Arab riots broke out in the mixed Jewish-Arab Israeli city of Lod and spread to other cities across Israel. Two Jewish citizens and two Arab citizens were killed.

Many of Ben Gvir’s voters point to these riots as the reason they gave him their support. In Israeli media, Arab citizens were mostly painted as the instigators, while organized Jewish attacks on the city’s Arab residents by busloads of armed vigilantes were barely reported. Police also arrested hundreds of Arabs, but very few Jews, giving the impression that mainly Jews were victims–despite the fact that hundreds of Jews attacked Arabs in the streets and at their homes.

Read More: The Problems With Israel’s Version of the Killing of Reporter Shireen Abu Akleh

The most egregious example of impunity was the case of Moussa Hassouneh, a 32-year-old Arab father of three from Lod, who was shot dead by members of a religious Jewish pseudo-settler community in Lod called the Garin Torani. The suspects were released three days after they were detained and the case was later closed. A video recently revealed that a government minister pressured police not to investigate.

Ben Gvir and other right-wing activists used the May 2021 riots to present the Palestinian citizens of Israel as a fifth column, or the enemy within. They promoted the idea that Jewish Israelis lacked “personal security” and that “Arab lawlessness was rampant,” After the riots, applications for firearms jumped from around 9,500 a year to nearly 20,000 in 2021.

Israel’s police commissioner Kobi Shabtai blamed Ben Gvir, the organizer of Jewish vigilantes, for instigating the riots. Now Ben Gvir demands to be named Minister of Public Security, after which the police commissioner will have to answer to him. The commissioner has already sent his associates to Ben Gvir to ask for his “forgiveness” for things he said, Yedioth newspaper reported.

The assassination of Yitzhak Rabin

On Sunday, Israel marked 27 years since the assassination of then-prime minister Yitzhak Rabin, by a young far-right ultra-nationalist Israeli Jew who opposed the creation of a Palestinian state. A few weeks before his assassination, Ben Gvir stole the hood ornament off of Rabin’s car, telling cameras, “We got to his car, we’ll get to him, too.”

The killing of the man who agreed to make peace with the Palestinians was the beginning of the end of the peace process that he had set in motion. To some Israelis, the elevation of Ben Gvir was a similar landmark.

“This place doesn’t feel like home the way it did,” Times of Israel social media editor Sarah Tuttle-Singer wrote on Facebook. “Instead of shared society, democracy, and decency. 1 in 7 have no problem with being a supremacist nation where the minorities living here feel at best, unwanted and at worst, unsafe. And my heart is breaking because I do love this country – my country. I do love [its] people – my people.

“But I can’t imagine sitting in the [Jerusalem outdoor market] and feeling the spectacular lightness and joy I once felt anymore. I’m not entirely sure what to do with that right now.”