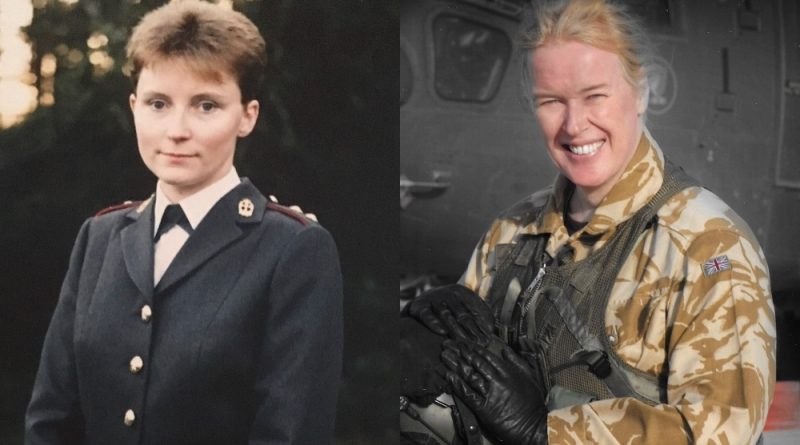 For the first time ever, LGBT+ veterans marched at Britain’s Remembrance Sunday service in a ceremony dubbed “an enormous honour” by one former lieutenant.

The remembrance service, which honours those who have fallen in Britain’s wars, is one of the most sombre events in the nation’s calendar.

Yet, as much as homosexuality was partially decriminalised in 1967, a ban on openly LGBT+ people serving in the military lasted for decades beyond.

Only until the European Court of Human Rights lifted it in 2000 were queer Britons allowed to serve. Even then, attitudes within the organisation took time to come around, and queer veterans felt unable to mourn with their fellow service people.

But Sunday morning (14 November), LGBT+ veterans were among those laying a wreath at the Cenotaph, a monument in Whitehall that honours fallen soldiers.

Fighting With Pride, the first of its kind charity that supports queer veterans, secured the right for a 24-strong group of former queer officers to take part in the ceremony organised by the Royal British Legion.

For many, it is the first time they have been publicly recognised as a member of the armed forces decades after being discharged for simply being who they are.

The threat of discharge loomed over many. Not only would their medals be stripped, but their pension rights would be pulled and they could even have faced criminal charges of up to six months in jail.

Left without a pension plan or an employment reference, queer former personnel can feel as if their past and future have been erased. Replaced, they say, with shame.

Today, however, was different. In formalwear decorated with restored medals and red poppies poking out of suit lapels and padded jackets, a contingent of LGBT+ former personnel walked through Whitehall with pride.

“Being asked to act as wreath bearer for Fighting With Pride’s inaugural participation in this year’s Remembrance Sunday Parade is an enormous honour,” said lieutenant Elaine Chambers.

Chambers was once deemed a criminal. Her military records were expunged and the medals ripped from her uniform. Her crime? Being in a relationship with a woman.

A former Queen Alexandra’s Royal Navy Nursing Corps officer, Chambers was among a campaign group that fought to peel back the ban on openly queer troops, taking it to the High Court.

They won. The work of Chambers and other members of the Rank Outsiders paved the way for countless queer people to serve proudly in the Armed Forces.

Now she is a proud wreath bearer. “I am genuinely moved and will be proud to take part in this emotional event,” she said.

The Ministry of Defence has since introduced a policy to enable former LGBT+ personnel to apply to have their medals restored for Sunday.

Caroline Paige, who served in the Royal Air Force for 35 years as a navigator and one of the first trans officers to serve, is now the joint chief executive of Fighting With Pride.

The charity was formed last year to bring together LGBT+ service personnel who were dismissed.

The service, Paige said, is “of great significance to everyone in the UK and in particular those who have been a part of the military.”

“It’s a proud day to see LGBT+ veterans included and one we are all looking forward to.”

For Chris Ferguson, a former Navy medical technician, the Armed Forces was and always will be his “family”.

“To march to remember the fallen is an honour I thought I would never be able to perform,” he said.

“For all service personnel, present and former, it is remembering our own family. The forces are one family, no matter in which generation we served.

“To be able finally to remember our family properly, as the equal of other veterans, is a profoundly moving experience for me.”

“In grateful remembrance to all the LGBT+ personnel who serviced with PRIDE across the generations,” the wreath reads. “We will remember them.”