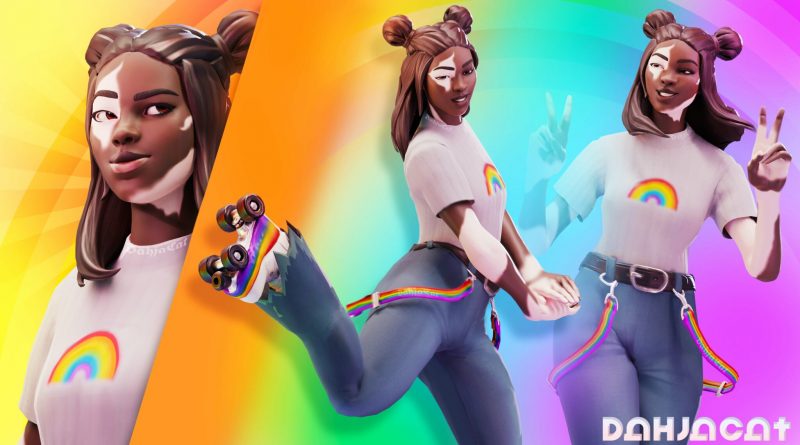 LGBT+ concept artist Dahja Cat is celebrating as their LGBT+ character skin with vitiligo will officially be added to Fortnite.

Alongside its core Battle Royale mode, Fortnite Create Mode allows creators to produce custom content on their own Player Islands like maps and skins.

And with the Fortnite Support-A-Creator programme, creators can even get paid when players purchase their creations using the in-game currency.

Dahja Cat’s newly designed skin Joy has now been picked up by Epic for official inclusion in the game and will be added to the Item Shop very soon.

I can not even explain how much happiness is filled inside me, Epic Games I love you with all my heart. Thank you for making my dreams come true. WELCOME TO FORTNITE JOY I LOVE YOU BABIE 😭🌈 pic.twitter.com/66rUhYcxQx

Dahja wanted to include a character with vitiligo – a skin condition caused by a lack of melanin.

“Joy was made to show the beauty of vitiligo, and I wanted a concept people who had the condition could relate to,” says Dahja Cat.

“I’m so happy that my goal of making people with vitiligo feel more comfortable and represented in a video game is becoming huge and finally a reality!”

Joy, originally named Dalia, was going to be a spy-themed soldier, but eventually Dahja Cat combined a hippie theme with a rollerskating concept.

Her outfit features a rainbow too, to celebrate the LGBT+ community. The character skin will include a Doja Cat dance emote as a nod to the rapper who inspired the artist’s name.

The new Fortnite skin has received plenty of joy online.

“The reaction of Joy that matters is the people who support her and love her just as much as I do,” says Dahja Cat.

“There are many people who acted out in horrible ways towards her, but this doesn’t change the fact that we finally have more inclusive mindsets in the game and more steps closer to even more representation. I’m so happy people love Joy, it truly makes my heart warm.”

In response, plenty of other artists have shared their character art of Joy. Says Dahja Cat: “So many different artists have shown their creative ability and all of the art is so amazing in their own ways. I am so happy and so grateful artists took time out of their days to make beautiful art of my creation, it’s truly a dream come true.”

@DahjaCat I drew your character Joy because she’s my new favorite skin and a congratulations on getting her in!! I hope you like it 🏳️‍🌈🏳️‍🌈🏳️‍🌈 pic.twitter.com/HVTQ2F57X4

🌈Dalia🌈
–
✨ Shine just as bright as a Rainbow ✨
–
Congrats @DahjaCat for getting their skin in game! Im really excited to see it come out soon!
–#Fortnite #FortniteArt #FortniteSeason7 #FortniteFanArt pic.twitter.com/OcC9AjTZNi

“Joy’s Dreamworld was made in celebration for her release,” explains Dahja Cat. “I wanted a safe place for people to hang out in when playing with their friends! Inside of the map itself, you have little mini games, jobs, ways to enjoy your stay. The map’s launch was super successful, so many people joined in on the fun and celebrated the moment.”

Play with friends, get a job, take pictures, live in the Joyful moment, and so much more! Drop in now!

The inclusion of Joy as an official skin is an example of Epic ensuring Fortnite is a diverse and accepting experience for all.

Dahja Cat believes the LGBT+ community has had a mixed reception in Fortnite, pointing to a recent Rainbow Royale event that was undermined when a fellow creator had their map removed and then reinstated despite homophobic comments.

“There is definitely a huge uproar when it comes to LGBTQIA+ creators and content being added and/or shown inside the game,” they say.

“There was a most recent event held by Epic themselves, called ‘Rainbow Royale’, which really brought the community together. Then again, there was still a ton of homophobia to follow the release of the event. I personally have found ways to ignore the hate, but there is still so much inside the community itself.”

There are pockets of positivity, though, and Dahja Cat believes the game as a whole is becoming more inclusive.

“Fortnite is becoming a more inclusive environment, which I am so happy is finally happening,” they say.

“Most of my friends and myself are a part of the LGBTQIA+ community, and Epic has truly been making the environment more welcoming. I see the community will sooner or later become loving as the game grows even larger than it is!”