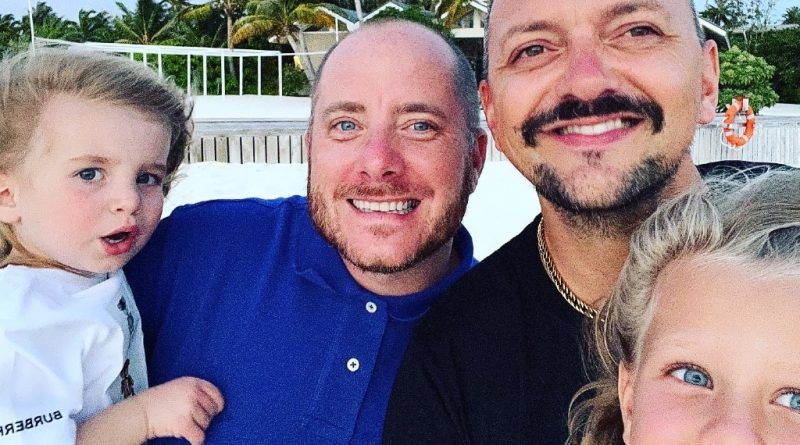 Michael Johnson-Ellis spoke to PinkNews about his journey to parenthood to mark Fertility Week 2021. (Provided)

“Financial infertility” is stopping same-sex couples from having the children they’re so desperate for.

Michael Johnson-Ellis and his husband Wes are proud dads to a son and a daughter, Talulah and Duke – but building their family hasn’t always been easy.

The happy couple met at Birmingham Pride in 2012 and instantly clicked. Before long, they were discussing their mutual desire to have children together. Wes already had a daughter from a previous relationship, but he was keen to have more children once he met Michael.

The only problem was, of course, that fertility options for LGBT+ people in England are still highly restrictive. Ultimately, having Talulah and Duke via a surrogate cost them in excess of £75,000 out of pocket.

“I had always wanted to be a parent, it was something I desperately wanted and I had never had a partner who also wanted children,” Michael tells PinkNews. “So when I did meet Wes, that conversation was struck quite early.”

Michael and Wes paid more than £75,000 to have their two daughters

Michael and Wes were certain that surrogacy was how they wanted to build a family. Their journey began in 2014 – they spent “a good couple of years” researching and learning about the process. During that time, they sought legal advice, chose the clinic they would use and had their embryos created.

Michael and Wes stumbled across a number of hurdles along the way. The first one was actually finding a surrogate.

“You can’t advertise for surrogates in the UK, that’s a criminal offence. It’s part of the Surrogacy Arrangement Act of 1985, this piece of legislation that’s not fit for purpose. It is immensely challenging for intending parents to find surrogates. You can find surrogates independently through Facebook groups, there are a couple of good ones, or you can use a recognised, sign-posted, government approved organisation.”

Going through a government-approved organisation was Michael and Wes’ preferred route to parenthood, but those groups “weren’t really accepting intending parents” at that time due to a shortage of surrogates. They were forced to work independently.

“So you would have to understand what surrogacy was, find your own surrogate, choose a clinic,” Michael explains. “Obviously surrogacy is all private – IVF… certainly for gay men, doesn’t exist on NHS England. Another obstacle was obviously the cost – it can range from £10,000 to £50,000, but we knew that that was the route we wanted.”

Michael and Wes found a lawyer as they wanted to make sure everything was done above board. They recommend that anyone embarking on a surrogacy journey seek legal advice before doing so.

“The independent journey that we had to do kind of worked out as one of the best things we ever did, because off the back of that, we formed Two Dads UK to help more gay men become fathers through surrogacy. We’ve supported over 325 men having babies that way. Later, we developed My Surrogacy Journey, which is a non-profit organisation. Because of our journey and what we had learned, we wanted to help more people come up with a more structured approach to family building.”

Today, Michael considers himself “super lucky” to be a parent. He reminds himself every day of how blessed he is to be a dad – and he knows that countless other LGBT+ people will never have the same opportunity he has had.

“Myself and my husband were able to fund our own cost of treatment, and we live in a country and a society where we can be parents and we can be married, which is wonderful,” he says. “I appreciate the fact that that was accessible to us. What’s really sad is that for many, financial infertility is actually a real issue because we can’t have any form of fertility treatments – not even a fertility test to get our sperm checked, to even get that done on the NHS is so challenging.

“To even consider having IVF is just a no-go for NHS England. So it’s just really sad that there’s a community of people that may not ever be a parent because of financial infertility, which is becoming a thing.”

One of those who is facing “financial infertility” is 29-year-old Nicolle Gaukrodger, who lives in Newcastle-upon-Tyne with her wife Ellen, who is 26.

“I’ve been wanting to start a family ever since I was young, I’ve always wanted to be a mum,” Nicolle tells PinkNews. “It didn’t really bother me in terms of sexuality, I always knew I’d have children either way, especially with finding my now wife. We wanted to start a family basically since the day we met. It’s just a really deep-seated need.”

Sadly, the financial barriers means that Nicolle and her wife have so far been unable to have children. She was devastated when she discovered that they would have to undergo a number of unsuccessful rounds of IVF or intrauterine insemination (IUI) privately before they would qualify for NHS-funded treatment. This is down to a “postcode lottery” system in England, where queer couples face varying levels of restrictions on fertility treatments such as IVF (in vitro fertilisation) and IUI (intrauterine insemination) depending on where they live.

Those arbitrary rules are based on NICE guidance (the National Institute for Health and Care Excellence), which states that female same-sex couples should undergo six rounds of IUI from a private fertility clinic before they will be considered for NHS care. However, the actual rules vary significantly depending on where you live. Clinical commissioning groups (CCGs) across England impose varying restrictions on would-be parents. Some require female same-sex couples to undergo two rounds of IUI before accessing NHS care, but most require six, meaning queer people are left paying thousands of pounds out of pocket before the NHS will consider them.

On the flip side, opposite-sex couples are simply required to show that they’ve been trying to conceive unsuccessfully through sex for two years before they become eligible for NHS treatment. It’s a striking double standard – and Nicolle says it needs to change.

“I don’t think we’re going to get the same kind of rights as what heterosexual couples have got,” she says. But even just reducing the number of rounds of private IVF same-sex couples must go through “would greatly help” – noting that this would still cost thousands of pounds.

She worries that there is a lack of awareness, both in the LGBT+ community and in the medical field, about the barriers queer people face in becoming parents in England.

“It’s not really discussed. If I hadn’t talked to specific people like GPs and specialists, I wouldn’t have known about certain services that I could get in touch with.” Nicolle says she was lucky that the GP she spoke with was a gay woman, “so she was sympathetic to everything I was going through”.

She continues: “I found that speaking to other GPs and other specialist services, they weren’t as empathetic.”

“I think people still have their opinions on the subject of what we should and shouldn’t be allowed to have, and even though times have progressed and people are a lot more aware, there are still barriers in place.”

“Currently Scotland has the same NHS criteria and provision for all couples, regardless. However, in other parts of the UK – particularly England – the majority of CCGs who do provide NHS fertility treatment require same-sex couples to self-fund six to 12 cycles of donor insemination to begin with. Even beyond that, not all CCGs provide NHS fertility treatment for same-sex couples. So there’s several barriers and challenges there from the outset.”

She continues: “I’d really struggle to think of another NHS medical discipline where same-sex couples, or indeed a single person, would be expected to partly self-fund to get on an NHS treatment pathway.”

Another issue she highlights is that some parts of the UK are experiencing shortages in sperm donors, meaning some people have to go private. This could be easily rectified with a public recruitment campaign.

“Recruitment campaigns can be done at very little to no cost, but it can make a massive different to those who otherwise won’t have the chance to start a family,” she says.

Burns says there are “many changes” that are needed across the board to improve LGBT+ people’s access to fertility treatment.

“The NHS is supposed to give equal and fair access to healthcare, and I think we can honestly say in the majority of CCGs in England, this is not the case when it comes to fertility treatment.”