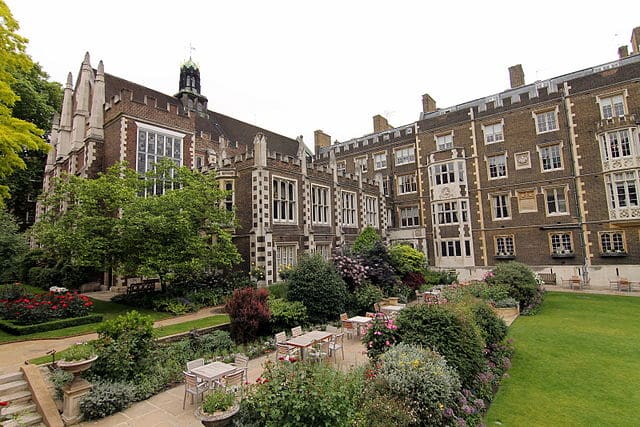 
A group of LGBT+ barristers have spoken out after an “anti-trans” lawyer was announced for a panel discussion on conversion therapy.

The Twitter account @LGBTQBarristers posted an unsigned letter to express “profound disappointment” at the inclusion of speaker Naomi Cunningham at the inaugural Middle Temple LGBTQ+ Forum on Tuesday. The letter is said to represent over 100 barristers, pupils and students.

The LGBTQ+ Forum, a queer group within Middle Temple, a society of English barristers, made changes on Thursday evening (11 November) to the event to include two previously unannounced speakers.

This morning, a group of over 100 barristers, pupils and students sent a letter to Middle Temple to express our profound disappointment at the organisation of the inaugural Middle Temple LGBTQ+ Forum. This is the letter in full. Please read it.https://t.co/feUUUSyZWi pic.twitter.com/CoAldn6eky

The letter states: “When the event was first promoted on 20 October, 2021, the discussion was advertised as ‘The Fight To Ban Conversion Therapy’.

“Nancy Kelley, chief executive of Stonewall, was invited as the guest speaker, with contributions from Robin Allen QC and Kieran Aldred…

“That changed when late on 11 November, 2021, only a few days before the event, the discussion topic was changed to ‘Banning Conversion Practices: The Path To Good Law’, now billed with contributions from Robin Allen QC, Jayne Ozanne (Chair of the Ban Conversion Therapy Coalition), Nancy Kelley, and Naomi Cunningham. Our concerns arise from the inclusion of the last speaker.”

Cunningham has also called the legal recognition for trans people afforded by the Gender Recognition Act a “legal fiction”.

“We are also concerned that the last-minute inclusion of Naomi Cunningham was the result of pressure to include someone with a ‘critical’ perspective of trans inclusion,” the letter states.

“LGBTQ+ organisers must be free to host discussion events made up of panellists who share a commitment to LGBTQ+ equality, including equality for trans people.”

The letter has proved divisive, receiving support and criticism on Twitter and sparking the hashtag #IStandWithNaomiCunningham from those who support Cunningham’s appearance on the panel.

The letter authors have called for the event to be postponed, and for refunds to be given for those who no longer wish to attend the event.

Middle Temple confirmed to PinkNews that the event will be going ahead on Tuesday evening, and that tickets will be refunded to those who no longer wish to attend, however it is “not aware” of anyone asking for a refund.

A spokesperson for Middle Temple told PinkNews: “The Inn [a term for societies such as Middle Temple] is fully supportive of the LGBTQ+ Forum.

“It is their event, designed and delivered by them, the contents of which the Inn would not seek to censor or limit. It has not sought to dictate who should or should not be on the panel for the discussion.

“As an Inn we are not in favour of ‘de-platforming’ people because they have different views, with which some people disagree. This Inn believes in freedom of speech and expression.

“It should be a place where discussion of different views can take place in an atmosphere of mutual respect. The panel has increased since the event was first advertised, to ensure that a wider range of views were represented.”

The Middle Temple event comes after the government launched a public consultation on a conversion therapy ban on 28 October.

The Conservative government’s proposed plans for a conversion therapy ban has been criticised however for allowing a loophole in which religious forms of the practice could remain legal.

The ban will target conversion therapy seeking to change sexual orientation as well as gender identity, according to consultation documents seen by PinkNews, but will allow for “consenting” adults to submit themselves for so-called therapy. Campaigners have said voluntary and informed consent cannot be given in such a situation.

The consultation will run from 28 October until 9 December.