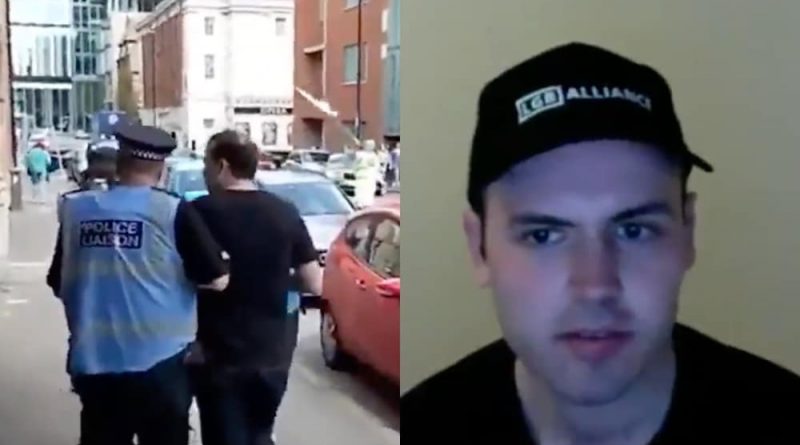 An LGB Alliance supporter who crashed Manchester’s Pride Protest has shrugged off claims the anti-trans group is “hateful”.

Appearing on the rowdy right-wing news outlet GB News Sunday (29 August), Alexander Bramham, a member of the high-decibel anti-trans lobbying group, stressed he is not part of a “hate group, because we’re not”.

Bramham, wearing an LGB Alliance branded t-shirt and beanie, was shuffled away by city police from the unofficial counter-march as a unified crowd of countless gay, lesbian, bisexual and trans people proudly chanted: “Trans rights now.”

Saying he was “self-conscious” about, er, wearing a hat, Bramham claimed protesters took his beanie off, “assaulted” him and would have “torn him apart” if it were not for the authorities.

According to video footage shared by demonstrators, the crowd responded by chanting and buttressing trans Pride flags and placards up high as Bramham, who is reportedly gay, was escorted away.

‘They would have torn me apart, it was terrifying’

Alexander Bramham, from LGB Alliance, was assaulted at Manchester Pride yesterday and says ‘I’m tired of this rhetoric saying we’re a hate group, because we’re not’ pic.twitter.com/5HuViz6rSc

A “One Nation Conservative”, according to his Twitter profile, Bramham told the broadcaster that the chanting made him feel “excluded” as he sought to, well, exclude trans people from the LGBT+ community.

“I felt excluded as a Conservative, as someone who identifies as LGB,” he told presenter Andrew Doyle, “I’m perfectly tolerant and respectful of differences of opinion but it feels horrible.”

What is also horrible is how transphobic hate crimes in England have surged to such terrifying new highs that police investigate hundreds of offences every month.

As is the threadbare trans healthcare, the gradual erosion of trans rights and the near relentless anti-trans news coverage which has left trans Brits more likely to suffer worse mental health than the straight population.

“It feels harmful, it feels like there’s an aggressive ideology that you have to conform to,” Bramham continued.

A reminder he supports the LGB Alliance, whose followers have hounded mental health charities, midwifery magazines and animal rescue centres that advocate for trans rights rather than the LGB Alliance, which only recently compared LGBT+ inclusion to bestiality.

In response to concerns from, well, the majority of LGBT+ people that the group is anti-trans, Bramham sought to drive a wedge between LGB and trans people even further. “I wore a t-shirt and hat that bests represents me,” he said, “I’d like to add to the debate.”

When trans rights are framed as a “debate”, top human rights experts say, the conversations quickly turn “toxic”. This, in turn, “shuts down freedom of expression and [stifles] discussion.”

“I want to show that the LGB Alliance is, like I did, are standing up for LGB issues,” he said of the LGB Alliance, whose followers are tied to homophobic groups and neo-Nazis, which the group has refused to denounce while also defending working with the anti-LGBT+ and anti-abortion Heritage Foundation.

“We’re not just about trans issues, we’re not a hate organisation, I hold no hate for any one of any gender reassignment and want to protect the Equality Act. I’m tired of this rhetoric saying we’re a hate group because we’re not.”

But, as writer and actual LGBT+ rights activist Max Morgan explained on Twitter: “Like it or not, Pride is a community event. And the community spoke as one to say, ‘Transphobia is not welcome here.’

“You can shriek about ‘homophobia’ all you want, but it’s not that.

“Gay men, lesbians, bisexual people and trans people rose up together to say, ‘F**k this.’”