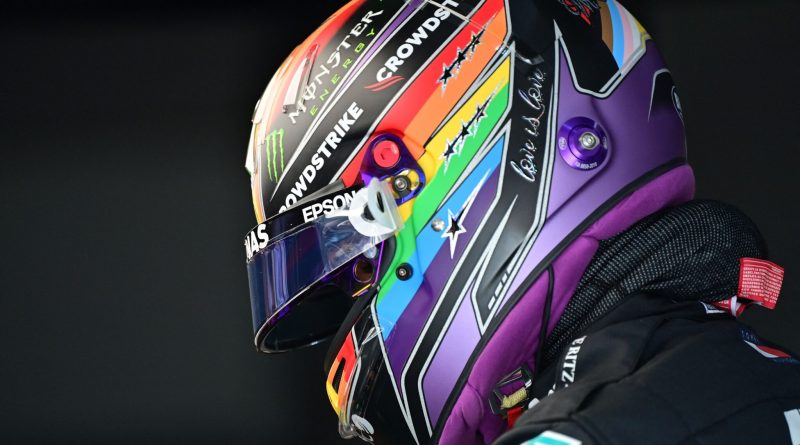 Mercedes’ British driver Lewis Hamilton is pictured in the pits during the third practice session ahead of the Qatari Formula One Grand Prix. (ANDREJ ISAKOVIC/AFP via Getty Images)

The British motor racing driver, the only Black driver in the series’ history, made a small but stunning show of solidarity at this weekend’s Qatar Pride Prix by donning the helmet.

With the words “We Stand Together” ribboning around it, the lid features the reworked Progress Flag designed by intersex artist Valentino Vecchieti, with a yellow triangle and a purple circle added.

As F1 pitches up in the Middle East, the auto racing tournament has faced severe scrutiny among human rights activists.

In Qatar, homosexuality is illegal: Men can be jailed for years for sodomy. The law even has provisions for “inducing” a man to commit “immoral” acts.

LGBT+ people face similar punishments in Jeddah, Saudi Arabia, and then Abu Dhabi, the capital of the United Arab Emirates, where the final two races of the season will be held.

And Hamilton fully intends to keep wearing his helmet for them both.

“I will be using the same helmet through probably the last two races after this, or at least next week also.

“On the back, it says ‘We Stand Together’ and ‘Love Is Love’ and it is important for me to support [the LGBT+] community here as I know there are several situations here that are not perfect and need to be highlighted.

“But I hope that someone reaches out and I would love to know what is happening here and what they’re doing to help that community more, the LGBT+ community.

With no criminal code, instead referring to the Islamic Sharia, Saudi Arabia sees homosexuality as a serious offence that can bring imprisonment, corporal punishment, vigilante attacks, chemical castration or even the death penalty.

To Hamilton, the continued abuse and slayings of LGBT+ people in this way are “big issues”.

“And I’ve been trying to think what is it I can do?” he said.

“I’m only one person, and I think the sport and all the drivers together and athletes can do more.”

“Seeing our community included means everything.”

Hamilton, who railed against the Hungarian government’s anti-LGBT+ laws in July, knows the importance of visibility.

“I hope that it highlights and sparks conversation,” Hamilton said.

“I hope that kids here and whoever is watching are asking what the flag is if they don’t know and why I am wearing it.”